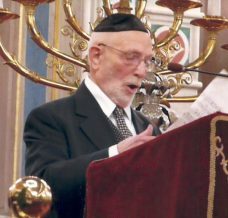 Deceased on April 18, 2016 at the age of 98 years old, Albert Kirch was for more than 30 years the cantor of the Jewish community of Metz. This article is a tribute to him.

Listen to the interview of Albert Kirch by Hervé Roten, below (in French)

Born on November 1st 1918 in Warsaw, Albert Kirch (Abraham Kirchenbaum) arrived in Metz (France) at the age of 2.

In 1932, he obtained his school certificate at the “Ecole Israélite”, followed by a grant for the Rabbi School in Paris. In 1938, he joined the Israeli Seminar.
During the war he was mobilized between 1939 and 1942. Many members of his family were killed in Auschwitz in 1942. 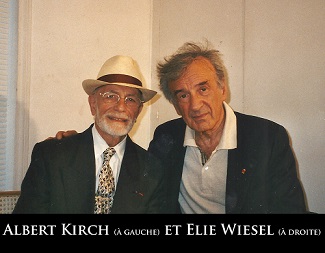 Demobilized in Clermont-Ferrand in July 1942, he entered the resistance in the Cantal region, particularly by making false documents during the Compulsory Work Service.
He taught French at the “OSE” (Children’s Aid Society), and prepared the writer and philosopher Elie Wiesel for his bachelor’s degree.

In 1950 he got hired as a cantor in Brussels as well as in Metz, along with Salomon Binn and Jules Ptachek.

He received in 1953 the First Prize Award for singing, at the National Music School of Metz. For 32 years, Albert Kirch was cantor in Metz, teaching the Bible to generations of students, among them the current Great Rabbis of Lyon and Metz.
He left Metz in 1982 to settle in Israel for one year.
Back in France in 1983, he took over his step-father’s position, M. Cohen, as a cantor and rabbi in Périgueux. 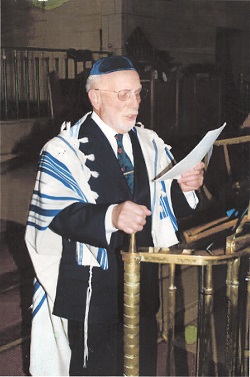 From 2000 to 2001, he replaced the Rabbi Charles Liché at the synagogue of Place des Vosges for the main holidays.

At the age of 96 years old, on October 20, 2014, the Great Rabbi of France, Haïm Korsia officially appointed him Rabbi, 69 years after the war and the forced interruption of his rabbinic studies, as a tribute for his teaching of Judaism and his transmission of moral Jewish values and faith to generations of students and worshippers.

Albert Kirch died on April 18, 2016. He is buried in Cronenbourg’s cemetery in Strasbourg.

On December 16, 2010, Hervé Roten made an interview with Albert Kirch, who then gave his musical archives to the European Institute of Jewish Music.