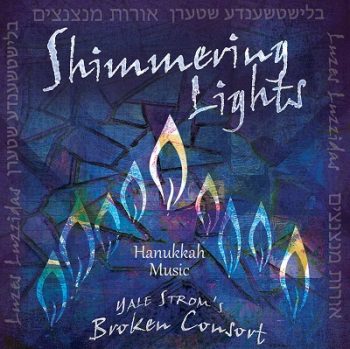 Produced by the American ethnomusicologist, musician, composer and film director Yale Strom, this album showcases 10 pieces of music, from 4 to 12 minutes each. Comprising traditional pieces and original compositions, built from various musical influences from various countries, this disc is a tribute to the many ways of celebrating Hanukkah around the world.

Performed by a string quartet, accompanied by an acoustic guitar, an electric guitar, an ud and vocals, Shimmering Lights presents songs in Hebrew, Yiddish, Judeo-Spanish and English. The first tune, Maoz Tzur, reveals the musical path taken by Yale Strom. This isn’t the melody everyone knows and sings along with their family, but an Arab-Andalusian and Berber tune from Morocco. The first notes are played by an ud, soon followed by a double bass, a guitar, vocals and then the string quartet. Going from traditional to art music, this first tune does not let us guess what follows, which is as surprising as it is harmonious.

To the two above-mentioned styles, one can also hear influences from jazz, blues, klezmer, bluegrass, Texas swing… An eclectic compilation, which takes us on a journey from Poland to North Africa, passing by Greece, the Middle East and the United States.
One learns much about how Hanukkah is celebrated around the world from the album’s rich liner notes. ‘Kita’l Tas’ explores the custom of Greek Sephardic children going from house to house during Hanukkah singing festive songs while also asking for flour and oil, which they took home to their mothers to cook some holiday foods.

The food eaten during Hanukkah features on Shimmering Lights such as burmuelos (muffins) on Azeremos La Merenda and Latkes (potato pancakes). Azeremos La Merenda focuses on the importance of oil for Hannukkah, and speaks of the transmission of food recipes from mother to daughter. The song Latkes, based on the folk song Bulbes (potatoes), speaks of how Jewish families were so poor they had to eat potatoes everyday. But on Shabbat, one cooked a special dish… made of potatoes

Like the miracle of the cruse of oil which permitted the purification and re-inauguration of Jerusalem’s Temple, this beautiful CD reminds us that Hanukkah’s magical spirit is still with us, whatever culture we belong to or country we come from.