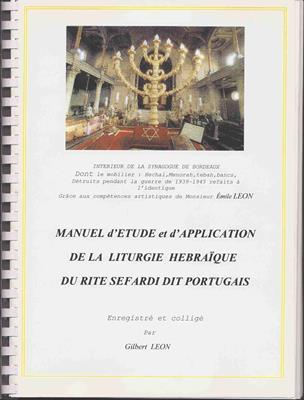 Recorded and gathered by Gilbert Léon

This monumental work is divided into three major parts. The first part is dedicated to the history of Biblical accents (tahamim) and how to frame them when reading the Torah. The second part describes the cantillation of poetic books: Psalms, Proverbs, Job … Finally, the third part presents the different services of the liturgical year, their prayers and their tunes in the Portuguese ritual.

In addition to the recordings to memorize each prayer, the manual contains a set of scores, including: the entirety of the Hebrew collection of traditional and liturgical songs of the Portuguese sefardi ritual used in the community of Bordeaux, by Mr. Salomon Foy ” , three religious songs (Achquibenou, Ymlorh and Song of Feast), also by Salomon Foy, printed in 1917 and performed in the Israelite Temple of Bordeaux, nine religious songs noted by A. Nunes in the late 19th century, A Lérhha dodi of the liturgical collection of Alphonse de Villers (1872), organist at the Portuguese Temple of the rue Lamartine in Paris, and finally extracts from the preface and the collection Traditional Hebrew Songs of Maurice Benharoche-Baralia, published in Bayonne in 1958.