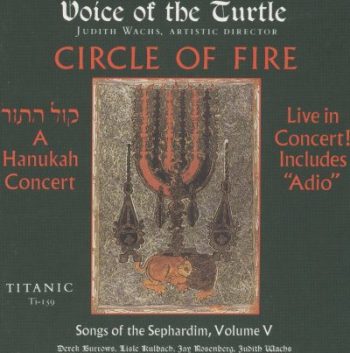 35 years ago, such a thing was rare, and the Judeo-Spanish music sources hardly accessible. Under the direction of Judith Wachs, the band will collect hundreds of Sefardi songs and record twelve discs, among which eight of them still available on CD or on download.

When Judith Wachs passed away in Octobre 2008, the band made a pause, until the arrival of the singer and musician Ian Pomerantz, in 2011.

The CD Circle of Fire – 5th volume from the collection Songs of Sephardim – was recorded in 1987, during a concert for Chanukah.

Learn more on the band Voice of the Turtle.
Purchase the CD’s or mp3