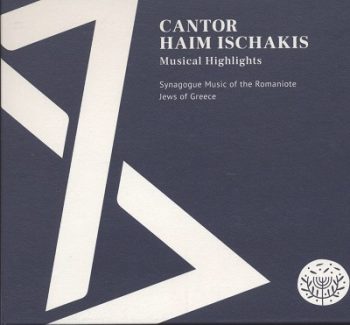 Synagogue music of the Romaniote Jews of Greece

Released in 2018 by the Europäische Zentrum für Jüdische Musik (EZJM) in Hanover, this 4 CD boxset offers a wide musical panorama of the liturgical tradition of Romaniote Jews from Greece.

The Romaniotes (this word defines the former inhabitants of the Roman Eastern or Byzantine empires) are Hellenized Jews who lived around the Eastern Mediterrannean sea or the Black sea for over 2,000 years. Some traditions make even go back to the Babylonian exile. These Hellenized Jews settled in the royal states from Alexander’s empire, in particular the Ptomelaeus Egypt. They adopted the Greek language and culture but kept their faith, and represents the origin of Judeo-Hellenist literature, which contains in particular the first translations of the Hebrew bible, the deuterocanonical books, which are not accepted in the Tanakh, the inter-testimentary books, and the first attempts to integrate philosophy to Judaism, in which the finest representative is Philo of Alexandria.

In the Middle-Ages, the Romaniotes disseminated their culture throughout the new Western communities, Ashkenazi (that is « German »), Sarfaties (that is « French ») and Sefardi (that is « Spanish »). The presence of Romaniotes is thus documented in Venice, in the Rhine valley and in Languedoc.

At the fall of the Byzantine empire, in 1453, the Romaniotes pass under Ottoman law. They continue to practice their own faith, their own language (Judeo-Greek) and other specific aspects (they adopted the Talmud of Jerusalem while the majority of the Jewish people adopted the Talmud of Babylon), but, with the arrival of the Jews expelled from the Iberic peninsula, the romaniot culture melts slowly into the Sefardi culture.

The community, wiped out during the Holocaust, now numbers only about 10,000 people in Greece, and has partly constituted itself in Israel and North America. At the beginning of the XXIst century, there are only four small Romaniote active communities left : in Thessaloniki and Ioannina in Greece, in New York and Jerusalem.

This compilation of field recordings, produced between 2016 and 2017 by Sarah Ross, director of the EZJM, and Miranda L. Crowdus, research assistant, aims to make this repertoire available to future generations. 70 prayers of the various year’s services have been recorded by the cantor Haim Ischakis, one of the last experts of the Romaniote tradition.

Haim Ischakis was born in Athens in 1959. His parents were from Ioannina and Chalkis, two cities in which a flourishing Romaniote community thrived before the war. Haim Ischakis studied in the Léonin high school, a French-Greek institute, and continued his studies in the Hebrew university of Jerusalem. Back in Greece in 1981, he devoted himself to perpetuate the Romaniote Jewish culture after the death of his father in 1996, in particular its musical tradition, to which he also added new melodies.

This is why, contrary to what is stated in the booklet as an existing original repertoire of Romaniote synagogue music, a great part of the tunes heard on these CD’s come from diverse backgrounds. Even if the way of singing and various ornamentation seem specific to the Romaniote ritual, we can hear in it many tunes of the Portuguese Sefardi ritual of France (listen in the playlist below the song n° 2 [Rau vanim from composer Emile Jonas], 7. [Et Shaarei ratson : ommon tune to most of the Sefardi traditions] and 8. [Lemaancha Elokai]. We also find Ashkenazi melodies (9. Uvenucho Yomar by Louis Lewandowski, 10. Maoz Tzur [classical Ashkenazi tune] and 11. Echad Mi Yodea [song of Passover with the traditional Ashkenazi tune]). Finally, we recognize Judeo-Spanish songs (4. Befi Yesharim on the melody of Üsküdara, 5. Kedusha on La rosa enflorece) and Israeli (3. Nishmat on the melody of Yerushalayim Shel Zahav).

As such, this « patchwork » is typical of Jewish traditions. We can however regret that this attempt to revive a moribund tradition is based on recordings of only one person. Because it is then difficult to identify what comes from one individual or from a group, which is from tradition and which is adaptation.