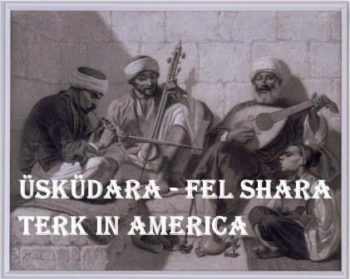 History of a Turkish tune that travelled a lot

Üsküdara giderik’en is a song taken from a Turkish operetta of the end of the 19th century, which was translated or adapted in dozens of languages (Judeo-Spanish, Serbian, Croationa, Greek, Arabic, Italian, Hebrew…)

According to the musicologist Judith Cohen[1]A section of this text is taken from the booklet of Judith Cohen’s CD, Dans mon chemin j’ai rencontré, published in 1997 by the music label Transit., Üsküdara giderik’en is a song taken from a Turkish operetta of the end of the 19th century. A young girl takes a walk in Üsküdar (Asian neighborhood of Istanbul) and finds a handkerchief that belongs, she thinks, to her lover. She fills it with traditional candy. Still very popular in Turkey, the song was translated or adapted in dozens of languages (Judeo-Spanish, Serbian, Croationa, Greek, Arabic, Italian, Hebrew…), and is sung as much by Jews and non-Jews in varied events (watch the documentary Whose is this Song?). 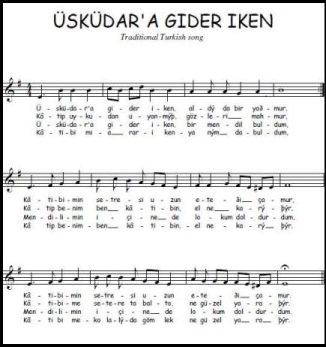 In North Africa, this song that blends Arabic, French, English, Italian, is known by the name Fel shara. In that version, the lover is mistreated by his mistress, who hits him with her umbrella. People liked that tune so much that it was used to sing several Sabbath or pilgrimage prayers.

This melody also inspired American klezmer music, with a recorded version by Naftule Branwein in 1924 with the name Der terk in America. Terkish is a 4 step piece with oriental style, played on a rhythm close to the Greek syrtos, the Turkish tsiftetelli or even the Spanish habaneira[2]See Michel Borzykowski, La musique klezmer en bref, http://borzykowski.users.ch/MCKlezmer.htm#terkish.