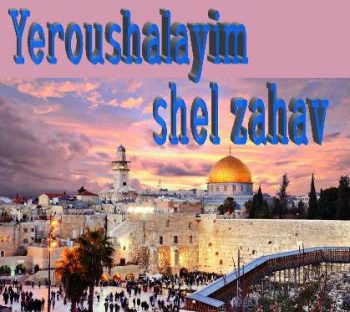 A song by Naomi Shemer

Jerusalem of gold (in Hebrew : ירושלים של זהב – Yerushalayim shel zahav) is the name of a popular Israeli song written by Naomi Shemer in 1967 and sung by Shuli Natan.

It was then sung, by many artists, in particular Rika Zaraï and Ofra Haza who sang it during the ceremony of the 50th anniversary of the State of Israel in 1998. 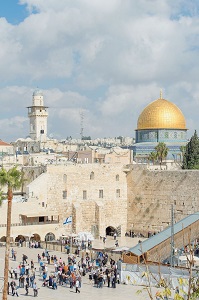 The chorus « Jerusalem of gold, copper and light » in reference to the golden color into which the buildings of the city, built in Jerusalem stone, change during dawn and sunset, quotes a verse of the Jewish Spanish poet from the Middle Ages, Juda Halevi (in the “Songs of Zion”) : « Of all your songs, I am the violin. ». The song glorifies also the fresh air of the mountains, the scent of pine, the tinkling of bells in the evening dusk, all claiming with passion: your name burns on our lips, like the heat of a kiss. Like often in Naomi Shemer’s songs, we find here several biblical references: in the first verse, the phrase « the town lies deserted » is taken from the Lamentations 1,1 and in the third verse, from the Psalm 137,5 If I forget you Jerusalem

The song was written on the eve of the Six-Day War and the conquest of East Jerusalem by Tsahal, which was occupied by Jordan since the war of 1948. It was thus the song that motivated the Israeli soldiers during the conflict. After the war, Naomi Shemer added another verse to his poem, to celebrate the unification of Jerusalem under Israeli domination. 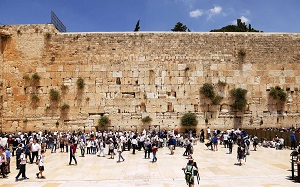 This song appears like a unique cultural phenomenon, at the intersection of politics, national identity and popular culture. Since its creation, it has become a symbol and an unofficial national anthem, frequently performed during official ceremonies. At first, the lyrics deplored a Jerusalem with « deserted markets », in which « no one visits the Temple Mount ; no one
goes to the Dead Sea by the Jericho route ».

Shortly before her death, Naomi Shemer admitted that she found her inspiration in an old Basque lullaby Pello Joxepe that she heard during a concert of the Spanish singer Paco Ibáñez in Israel in 1962. I do not consider it as plagiarism, declared Ibáñez after that announce, adding : I am happy that it helped in a certain way.

Watch 12 historical performances of the song Yeroushalayim shel zahav, in the article « 12 versions of the song Jerusalem of gold », Kef Israël, May 17, 2012.