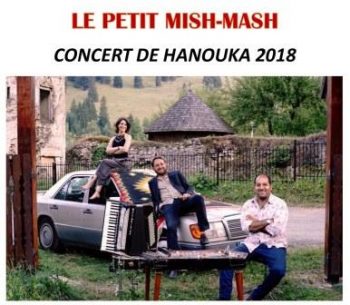 Watch excerpts from the concert of the Petit Mish-Mash, which took place the 9th of December 2018, at the Synagogue of l’ULIF- Copernic.

The Petit Mish-Mash, it’s the encounter of the Gypsy accordeonist Adrian Iordan, native of Bucharest, the cymbalum player Mihai Trestian, trained at the Music School of Chisinau (Moldova) and the clarinetist/flutist Marine Goldwaser, musician of the new klezmer scene. Gathered around klezmer and Gypsy music, the three musicians let their musical cultures dialogue to give a new performance of these ancestral repertoires.