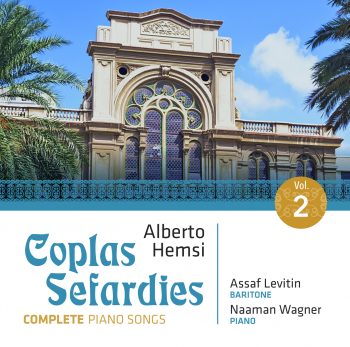 The full works for voice and piano by Alberto Hemsi finally available on CD !

On the occasion of the 120th anniversary of Alberto Hemsi’s birth (1898-1975), Assaf Levitin, cantor of the reformed synagogue of Hanover, and the pianist Naaman Wagner recorded the full works for voice and piano of this composer still too little known. This project was supported by the Europaïsche Zentrum für Jüdische Musik of Hanover.

Alberto Hemsi was a fervent admirer of Sephardic folklore and its musical traditions. As a pianist and composer, he collected 230 poems and melodies in the Sephardic communities of the old Ottoman Empire between 1923 and 1937. Of this important body of work, Hemsi will retain 60 traditional melodies for which he composed “pianistic parts, whose realization turned out to be rather complicated, because it was not a question of ’accompanying’ simply the said songs, but framing them in small symphonic pictures, in order to make them suggest as much as possible, the atmosphere, the state of mind, the subject and the melody “. Real symbiosis between traditional song and scholarly art, Alberto Hemsi’s 60 Coplas Sefardies thus offer a renewed vision of the Judeo-Spanish tradition.

After the release of the first volume of the Coplas Sefardies,