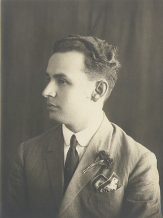 Excerpt of the booklet from the CD Alberto Hemsi, Coplas sefardies, coll. Musical Heritage of the Jews from France, EIJM’s editions, 2004

Born on June 27, 1898 in Cassaba, a Turk village East of Izmir, to Italian parents, Alberto Hemsi studied at the school of the Universal Israelite Alliance. In 1913, he received a scholarship and was sent to Milan by the Musical Israelite Society of Izmir. He entered the Royal Music Conservatory of Milan in 1914, and had solid studies with the famous teachers of the time: piano with Andréoli, harmony and composition with Bossi and Perinello.

Near the end of World War I, he was called to join the army, as an Italian subject. Wounded at the right arm, he obtained several civil and military decorations. He became captain at the end of the war, and left the army to dedicate himself only to piano and composition. 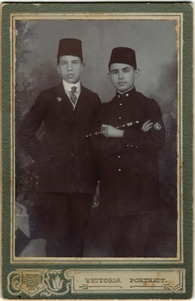 In 1919, he received his diploma of instrumentation, and decided to go back to his homeland. His return was celebrated with very old melodies sung by his grandmother. Touched by the beauty of what he heard, Hemsi understood the need to save this oral traditional heritage.

Between 1920 and 1923, Alberto Hemsi taught theory, piano and choral singing in Izmir. From 1924 to 1927, he settled down in Rhodes, gave courses and started ethnographic and folkloric research, especially among old women and cantaderas, semi-professional singers, renowned for their beautiful voice, who were invited by families to sing during special events (weddings and other celebrations). It was also in Rhodes that he met his wife Myriam, whom he married at the end of August 1930 and who gave him three daughters: Allegra, Juliette and Ketty. 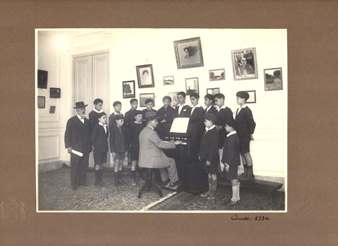 In 1928, the Israelite Community of Alexandria (Egypt) asked him to become musical director of Eliahou Hanabi Temple. As a music teacher in the community’s schools, he created and led an orchestra consisting of wind instruments. He also gave harmony and composition classes in the G. Verdi Conservatory of Alexandria until 1940, then the Music Conservatory of Alexandria from 1952 to 1957. In that year, after the Sinai war, he settled in Paris with his family.

During his Parisian career, Hemsi was in charge of conducting two Sephardi synagogues, Brith Shalom and Don Isaac Abravanel, as well as teaching the courses of musical liturgy in the Israelite Seminary of France. A musicologist, hard worker dedicated to the Judeo-Spanish cause, he hosted several radio shows in the Spanish language on a French radio station in order to make people know more about Judeo-Spanish folklore. Shortly before his death in 1975, he was chosen to be correspondent at the Royal Academy of Arts of San Fernando in Madrid in recognition of his work on Sephardi music. 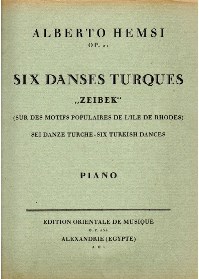 Winner of many international prizes, renowned musician, Alberto Hemsi left behind him an important musical works (54 opus), often unpublished and of exceptional quality: many pieces for piano and voice (Kal nidre, Yom guila, Biblical Visions, etc), for choral ensembles (Six chorals works in Ladino, Four Hebraic pieces, etc), for one or two pianos (Three Egyptian dances, Three Biblical dances, etc), for fidl, viola or cello and piano (several Sephardi suites), and finally for various ensembles and symphonic orchestras (Biblical dances, Tableau symphonique, etc).
A great part of his work exists only as tracing papers or in manuscript, that are today kept at the European Institute of Jewish Music following the donation of his archives by his widow, Mme Myriam Capelutto Hemsi.