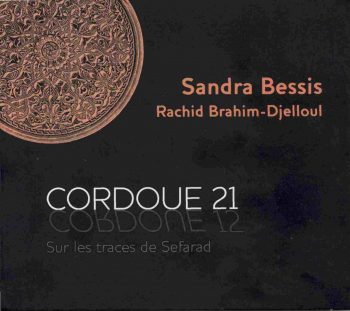 On the traces of Sefarad

The spirit of Cordoba ? This Cordoba has not existed for more than nine or ten centuries. And what about it in the beginning of this 21st century ?
This is the question asked by Sandra Bessis and Rachid Brahim-Djelloul in this new recording dedicated to the music of those expelled from Spain.

If the Judeo-Spanish songs are a starting point, they stroll with Arabo-Andalusian or Judeo-Arab pieces, improvisations and Oriental instrumental melodies.
Music of the Mediterranean, this CD is a tribute to these emblematic towns where coexistence between communities, where one might take imaginary walks, from Cordoba or Granada, to Salonica and Istanbul, Tetuan and Constantine. A celebration, in our way, of the marriage between East and West, between the divine and profane, between popular and scholarly traditions, of yesterday, and of today…

Six evocative ballads – from Granada to Cordoba, passing through the Balkans, Salonica, Istanbul and even Tunis, Algiers and Paris – construct this album, with the voice of Sandra Bessis, recognized singer of the Sefardi repertoire for more than 25 years, and the voice of Rachid Brahim-Djelloul.

Sometimes together and sometimes one after the other, their voices take the routes that border the Mediterranean Sea. With the accordion player Jasko Ramic, with his two-part musical background, classical music that he learned in Moscow’s music conservatory, and traditional music with his attachment to the Gypsy tradition of Serbia, the ud player Noureddine Aliane and the percussionnist Yousef Zayed, they revisit the repertoire, far from all fantasy of reconstitution. Because we talk here of ” re-creation ” : the choice of songs, the association from one to another, that go back several centuries, or contemporary compositions, the interconnection of traditional melodies with Arabic poetry of the Medieval era, the arrangements and instrumentation, follow their eras. Languages stroll together, rhythms, emotions, a way to perpetuate this antique tradition, between sharing and moving.

Learn more
Listen to the radio broadcast :Sandra Bessis, on the traces of Sefardi music