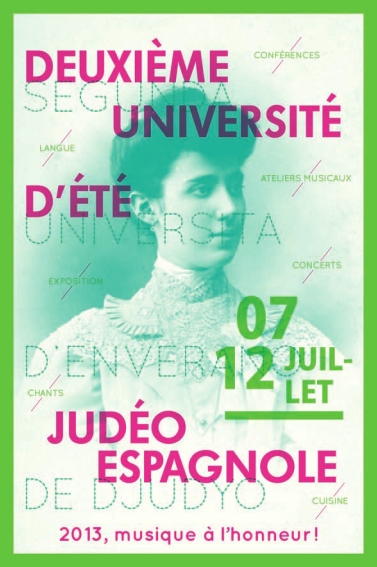 In July 2012, the first university of Judeo-Spanish, organized by Aki Estamos, the AIU, the EIJM and INALCO, gathered over 130 participants.

In 2013, the second summer university of Judeo-Spanish offers new activities and new themes. In this year’s program, the Marrano adventure holds an important position. Turkey, Spain and Morocco will also be mentioned with speeches, and without forgetting the memory and genealogy work to better anticipate the future.
Music and songs will be present during morning workshops, three conferences and five evenings of concerts.

The European Institute of Jewish Music, partner of the event, will be present with speech of its director Hervé Roten, on “the musical tradition of Marrano communities in South West of France”, during the round table “Marrano Routes and Singularities” on July 8, 2013.

This university is open to all on subscription.