The biography of this composer, who was born on March 19, 1882 in Odessa and died in Auschwitz in 1943, still remains incomplete. The fifth child of a modest family, Vladimir Dyck showed gifts for music from his earliest years, to such a degree that Rimsky-Korsakov, whom he perhaps had as a music master, advised him to further his studies at the Paris National Conservatory of Music. He came to Paris in 1899 at the age of seventeen and succeeded in being admitted to this institution a year later. In 1904, he obtained a First Prize in Antoine Taudou’s harmony class and attended Paul Vidal’s class in piano accompaniment.  Shortly afterwards, he became the student of Charles-Marie Widor in composition, and by the decree of February 5, 1910, he acquired the French nationality to be able to participate in the composition competition of the Institut de France. In 1911, he was awarded an additional Second Grand Prix de Rome for his cantata Yanitza, behind Claude Delvincourt (first Second Grand Prix) and Paul Paray (First Grand Prix).  The press of the period drew attention to his talent and his gifts, but he was unable to participate in the competition the following year in an attempt win a First Grand Prix since he had reached the age limit.  He then gave piano lessons in Paris.  Among his students figured Henriette Poincaré (the President of the Republic’s wife), Madame Caillaux, (the wife of the Minister and President of the Council of State), and Suzanne Bloch (born Mina Kabran, September 7, 1887 in Omsk – Russia) whom he wed and who gave him a daughter named Nicole.

Alongside his teaching activities, Vladimir Dyck was a prolific composer who tried his hand at all musical genres, from French patriotic songs: Alsace lève-toi ! (Arise Alsace) to lyrical comedy: Le Sous-préfet aux Champs (The Assistant Prefect in the Fields, 1919), from instrumental music: Orientales, pour piano (Orientals for piano, 1909), as well as Symphony in C minor for piano four hands, 1906, Symphony for 10 wind instruments, 1910, Impromptu for cello… and piano, 1912… to film scores written under the pseudonym Dri Mival, an anagram of his surname:  À travers Champs (Through the Field), Footit, Parisette, Tartarin, Prince Charmant, Théodora, Beloved Landscapes, 1927, Douglas, Africa, 1928, Vénus Astarté, 1929.

Vladimir Dyck is also the author of an extensive Jewish production: Berceuse hébraïque (Hebraic Lullaby), Eli! Eli! – sur un theme juif, Hatikva – Chant de l’espérance sur un thème juif (Song of Hope – On a Jewish theme, Three Hebraic pieces – for cello or violin and piano, 1933, and the 1st and 2nd Hebraic Legend, 1936, published in the Mizmor collection of the Éditions Salabert, which he co-directed with Leon Algazi from 1933 onward. He also arranged or wrote Yiddish songs: Der gouter Chadken, Kadisch de Rèbe Lévi after a Jewish Folk Melody… and several prayers for liturgical services (Adon olom, Avinu malkenu, 1934, and Psalm 137…), probably in connection with the activities of Leon Algazi, who directed the Mizmor choir and the choir of the Great Synagogue of Paris, rue de la Victoire. 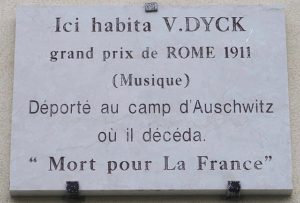 In 1943, Vladimir Dyck was arrested by the Gestapo at his Parisian home at 79 avenue de Breteuil with his wife and his daughter. He was deported to Auschwitz on July 31 and was assassinated a few days later on August 5, 1943.

*Taken from the CD’s booklet Hebrew Melodies for cello and piano, 2nd vol., Collection Classiques vol. 7, Les Editions de l’IEMJ, 2021, with the author’s thanks to Corine Rachel Kalifa for her precious help in the elaboration of this biographical note.

Browse our archives on Vladimir Dyck