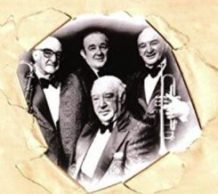 Max started playing the violin during silent screenings at the age of 12. When he was 16 years old, he began playing the saxophone and then the clarinet. Very soon, he started playing in Romanian and Russian Jewish cabarets. His style was influenced by older immigrant musicians, including Dave Tarras, Naftule Brandwein, and Sam Beckerman, who helped him expand his repertoire by including the traditions of previous generations of klezmorim from Eastern Europe.
His brother, Isidore “Chi” Epstein, who played saxophone and clarinet, helped spark his brothers’ interest in music. Willie Epstein became a leading Yiddish trumpet player of his generation, thanks to his collaboration with leading Jewish dance and theater orchestras.
Julie started accompanying Max at the age of 17, and quickly earned a reputation as a prominent drummer in Jewish music.

The Epstein brothers started playing together in the late 1940s after the Second World War. At that time, their repertoire consisted mainly of Hasidic traditional music, following the massive immigration of Jewish survivors from Eastern Europe after the Holocaust. As a group, the Epstein brothers toured the cities of New Jersey, Pennsylvania, Maryland, Massachusetts, and Michigan, as well as Toronto and Montreal, playing wherever there was a Jewish community, and especially for the Lubavitch communities (the largest Hasidic movement). Their music was also very popular for Greek and Italian weddings.
Throughout their lives, the Epstein brothers have lived from their music, mainly entertainment, which they played in neighborhood clubs and reception halls in New York.

To their credit, there are several recordings of Hasidic music for the Tikva and Menora labels. But because they could read music, the brothers did not just play Jewish traditional music, they also played popular dance and jazz music.

In the late 1960s, they all settled in Florida, where they recreated their klezmer band. Chi died in 1986, leaving the three brothers. In the mid-1990s, the three half-retired brothers continued to perform four to five concerts each week in southern Florida, and it was during this period that the klezmer experienced a renaissance in America and abroad. Once again, the Epstein brothers found themselves speaking for a tradition they had always supported over the years.

In 1996, Max, William and Julie played together in the documentary “A Tickle in the Heart” which tells the story of the four brothers. In 1998, they received the National Heritage Award from the National Endowment for the Arts.