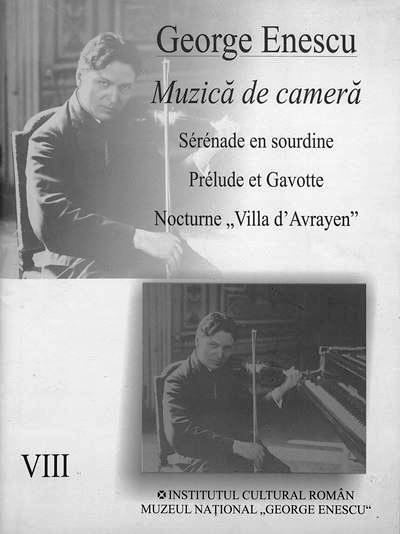 Eighth volume of the complete edition of George Enescu’s works, this sheet music is dedicated to the composer’s chamber music. Published at the Salabert Editions in 2014 by the Romanian Cultural Institute – National Museum George Enescu, this compilation includes three works by Enescu :
– the Sérénade en sourdine for violin and cello
– the Prélude et Gavotte for violin, cello and two pianos
– the Nocturne Ville d’Avrayen for piano, cello, viola and violin

Although the composer left officially 33 opuses, his complete catalogue counts several hundreds works. Enescu touched all musical genres, piano solo, chamber music (a favourite area), symphonies, melodies (particularly during his youth), an opera with his Œdipus praised as a masterpiece since its creation in 1936 at the Palais Garnier.

According to Sherban Lupu, specialist of Enescu and master of this edition of Enescu’s complete works, the Sérénade en sourdine for violin and cello was composed between 1915 and 1920. The only knowned manuscript included several mistakes which explains the fact that this piece was never performed. Sherban Lupu found the original manuscript, written from Enescu’s hand, and was able to do the necessary correction.

The Prélude et Gavotte dates from 1898, a time when Enescu was studying at the Paris Music school. This piece is written for violin, cello and two pianos, an unusual formation. According to Sheran Lupu, this work comes maybe from a composition given by his masters André Gédalge or Gabriel Fauré. « This work seems to somehow parody the baroque, especially the gavotte, where Enescu introduces elements from klezmer music, so characteristic of Moldova’s folklore at the time. »

Still according to Sherban Lupu, the Nocturne Ville d’Avrayen for piano, violin, viola and cello was written between 1931 and 1936, and was a moving expression of the relation established between Enescu and his pupil Yehudi Menuhin, to whom the composer started giving lessons in 1927. In 1931, the Menuhin family settled down in Ville d’Avray, a town near Versailles, where Enescu often went to play chamber music. In 2005, the discovery of a manuscript of that same piece in the archives of the composer Fernand Halphen (1872-1917), classmate of Enescu in the music school, invalidated this hypothesis. The Nocturne Ville d’Avrayen, dedicated to Fernand Halphen, is a youthful work by Enescu, written on July 5, 1898, when he was staying at the Halphen family’s house which was also in Ville d’Avray ! This manuscript, given by the Halphen family to the European Institute for Jewish Music, is partly available for consultation on the Rachel online catalogue. 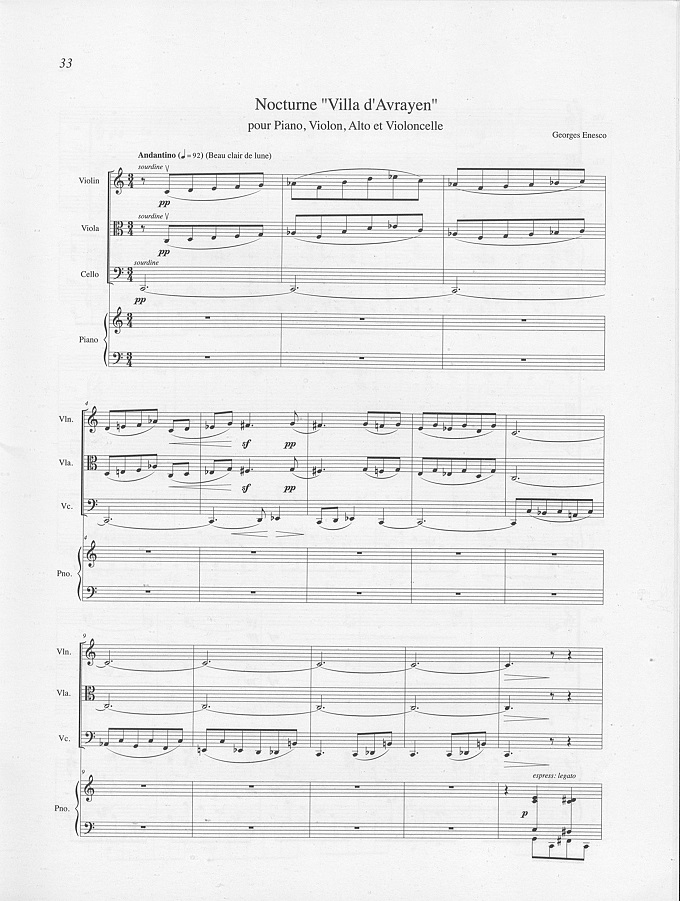