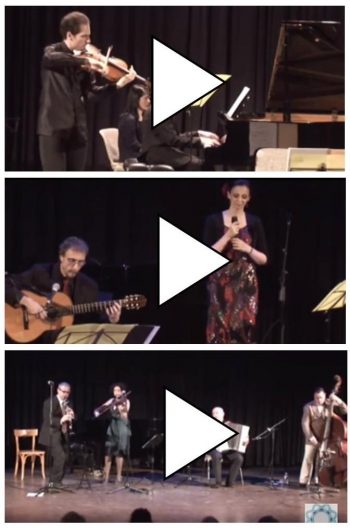 Watch video clips of the first edition of the European Institute of Jewish Music’s Gala Concert, “Jewish music in all its states”, which was given November 8, 2015 in Adyar Theater in Paris, in front of an enthusiastic audience of 350 people, with the support of the Henriette Halphen Foundation, under the aegis of the Fondation du Judaïsme Français.

In the first part of the concert we heard Martine Bailly, (cello), Philippe Cuper (clarinet), Yun-Yang Lee (piano), Florin Szigeti (violin) and Ralph Szigeti (alto) perform works from the classical repertoire, such asthe Feuillet d’album for piano, Andante religioso for cello and piano and the 1st movement of the Sonate for piano and violin by Fernand Halphen, the 2nd Suite Sefardie for piano and alto by Alberto Hemsi (french creation), the Petite suite klezmer for clarinet and piano by Serge Kaufmann and the beautiful Nocturne Ville d’Avrayen for piano, violin, alto and cello by George Enescu (world creation in its original version).

Program of the IEMJ 2015 Gala Concert (in french)