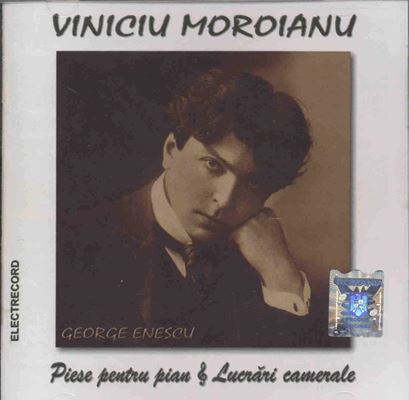 Here is a beautiful CD dedicated to the composer, virtuoso violonist, pianist and conductor George Enescu (1881-1955).

The latter two tunes, of which one was recorded during a concert and the other in studio, are published for the first time in an audio recording. We will notice that the Nocturne Ville d’Avrayen, recently discovered in a manuscript kept at the Instututul Cultural Român – Muzeul National “George Enescu” is wrongly dated 1931-1936, and credited to the collaboration of Enescu and Yehudi Menuhin. In reality, it is a youth work (1898) dedicated to Fernand Halphen, his classmate at the Music School of Paris, in the composition class of Jules Massenet (Learn more on Enescu’s Nocturne Ville d’Avrayen)

The anecdote concerning the creation of the Trio, written in the CD’s booklet, is interesting to mention. “In March 1916, Enescu who was then in Bucharest was hospitalized for an unknown reason… During his one week hospitalization, he found the energy and opportunity to compose this work, which he quickly transcibed onto paper, a complete version, that we can hear today. The manuscript was discovered nearly 40 years later. […]
This manuscript, written without the help of a piano, shows very few corrections, an unusual fact for a composer. The only explanation is that Enescu already had the whole composition in his exceptional memory, had thought of it in detail, and was just waiting for the chance to write it down on paper. No musician would be capable of imagining and finishing such a complicated work, without corrections or hesitation, in just one week, a work which would take precisely one week to copy. I suspect that it is for this reason that Enescu had himself hospitalized, to have the tranquility needed to put on paper this composition that he was thinking about for quite a long time.”