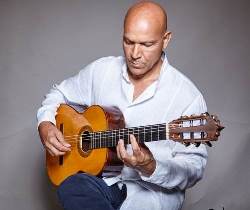 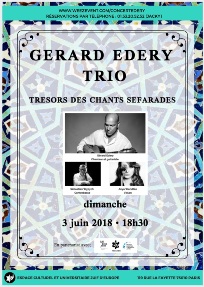 historical and cultural scope of the music of the Sephardi Jews inside their diaspora. Secular and liturgical songs of the ancient Persia, Spain, Greece, Portugal, Turkey, Morocco, Egypt, the Balkans, and Syria, from the Middle Ages to nowadays, tell us a rich history which favor a profound intercultural understanding. “Treasures of Sephardic Songs” performs this ancient repertoire as a live heritage, combining the stylistic authority with an immense creative and re-creative mood.

Gerard Edery is born in Casablanca and grew up in Paris and New-York, speaking several languages in his childhood and absorbing a whole variety of musical traditions on the three continents. Being given a classical music education of a baritone singer at the «Manhattan School of Music», he played around 30 different roles with various opera troupes in the USA. Gerard is also a virtuoso guitarist adapting a personal and sophisticated style to the arrangements of traditional songs and to his original compositions – a worldwide repertoire embracing around 12 different languages. His particular passion is the rich heritage of Sephardi and Mizrahi melodies. Considered as one of the best performers of Sephardic songs, he was rewarded with the «Sephardic Musical Heritage Award» and «Meet the Composer» for his original songs. His musical «Song of the Turtledove», based on the texts of Shir Hashirim, was presented by Premières, a festival of recent works at the «Lincoln Center».