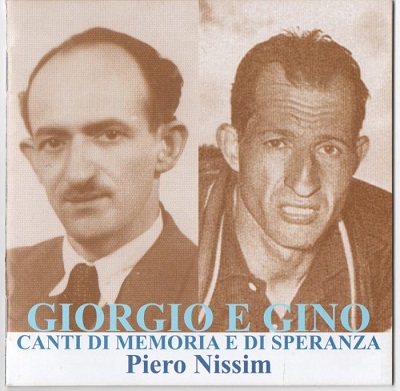 Giorgio e Gino, Canti di memoria e di speranza (songs of memory and hope), is an album of songs on the theme of the Holocaust and the resistance, by Piero Nissim. Performed mainly in Italian, this CD includes songs written by other composers, but all arranged and sung by Piero Nissim. There are songs such as Zog nit keyn mol, Canzone degli ebrei nel campo di concentramento, Hatikva. La speranza, or Se questo è un uomo, the text of which was written by Primo Levi. Giorgio e Gino is the only song that has been entirely written and composed by Piero Nissim.

But who are Giorgio and Gino, whose faces illustrate the cover of the CD? Giorgio is none other than Piero Nissim’s father. Born on March 23, 1908, 100 years before the release of this CD, Giorgio Nissim was an Italian Jew and an active anti-fascist. He was an animator in Tuscany of the DELASEM network, acronym for the Jewish Emigrant Delegation, a Jewish resistance organization that operated in Italy between 1939 and 1947, to help Jewish emigrants and provide economic aid to internees or refugees. In Italy, the Jewish network was (badly) tolerated, and after September 8, 1943, it was forced to act illegally. DELASEM was also supported by non-Jews, laypeople, and members of the Catholic Church, including the great cycling champion Gino Bartali. Giorgio Nissim’s great friend, Gino Bartali, under cover of training outings, smuggled during the Second World War, all sorts of documents and false papers hidden in the handlebars or the saddle of his bike. His clandestine messenger activity saved about 800 Jews. He was recognized as “Righteous Among the Nations” in September 2013 and his name appears on the Yad Vashem Memorial.

It was to these two personalities that Piero Nissim, on vocals and guitar, wanted to pay homage, accompanied by Davide Casali on clarinet, electric bass and percussion, Samuele Orlando on the keyboard and Myriam Nissim on the choir.