Revivo project was created in 2012 in Israel and quickly became famous.
The band is composed of three singers: Raviv Ben Menachem (who will give his name to the project), Nir Ben Menachem, his brother, and Eliran Tsur, close friend of the two brothers.
Their repertoire is composed mainly of Yemenite songs that was heard during their childhood, revisited with today’s style. We can hear medleys and pot-pourris which some last between 7 and 8 minutes. 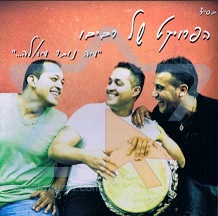 Their video clips are created in a “Takzina” style, a kind of gathering typical from the 1970’s in Israel, accompanied with music and where a lot of liquor is drunk.

Until now, this band published seven discs, including one live album from their gigantic concert which gathered more than 10 000 people in front of the walls of Jerusalem.
Very famous singers are invited during their concerts, such as Yoav Itzhak, Eli Luzon, Haim Moshe …