Hélène Engel presents the album “Yiddishe Fantazye”, by the Trio Weisberger/Branthomme/Triestan, 3rd volume in the collection Discovery, published by the Editions of the EIJM.

Yiddishe Fantazye immerses us in the world of Jewish music in Eastern Europe, long before the accordion and clarinet became inseparable from klezmer music.
At that time, the main instruments played were violin, cymbalum and bass (cello or double bass). In weddings, the musicians did not only make the people dance but also cry. “God” was a familiar word, people called him “Gott”, and it went along with the music and the vodka in good heat … 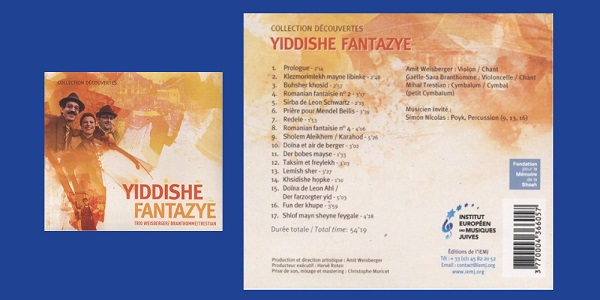 From ancient Klezmer recordings and poetic texts in Yiddish, the trio Weisberger / Branthomme / Triestan offers us authentic and tasty music. To listen without moderation.

Order the CD on the EIJM’s online shop