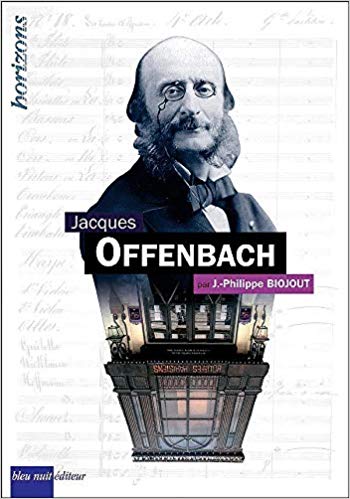 Born in Cologne the 20th June 1819 and naturalized French in 1860, the composer Jacques Offenbach came to “conquer” Paris in 1833. After attending the Paris Music School and the Opéra-Comique (as a cellist), he met Halévy who helped him to master composition. Thanks to von Flotow, he got access to the Parisians salons where he became known as a virtuoso performer, before conducting music at the Comédie-Française.

Facing a stubborn refusal from the directors of the Opera and the Opéra-Comique, he decided to create his own theatre, on the Champs-Elysées, on the occasion of the 1st World Exposition of 1855, and then in the Passage Choiseuil where the theatre still has the name today of “Bouffes-Parisiens”, and saw the creation of Orphée aux Enfers (Orpheus in the Underworld) in 1858 (the play was performed over 1,000 times during the author’s lifetime. 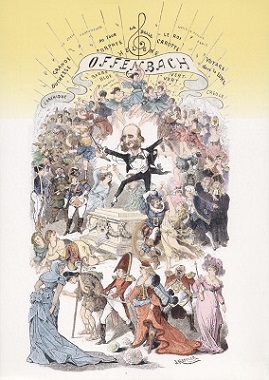 Offenbach’s success quickly became international and his supremacy came during the 2nd World Exposition in Paris in 1867, in particular with La Vie parisienne and La Grande-duchesse de Gérolstein (The Grand Duchess of Gerolstein), performed by Hortense Schneider. With the downfall of Napoleon III and of his Empire, Offenbach faced a certain disaffection, which profited Lecoq, and it would be compensated only by his latest successes : La Fille du régiment in 1879, and his last opera created a few months after his death (4-5 October 1880) : The Tales of Hoffmann.

Still often considered wrongly as the “father of the operetta ” (actually, this title is attributed to Hervé), Offenbach was undoubtfully the master of a “buffa” genre that influenced all Europe and gave birth to Viennese operettas (Strauss, Léhar) and English operettas (Gilbert & Sullivan).

Opera singer and playwright, Jean-Philippe Biojout often worked on the joyous repertoire of Offenbach. In 176 pages, he took the challenge of summarizing the life and work of the long-winded composer (over 100 lyrical pieces in particular) by giving us an original biography, with 64 résumés, 63 musical exemples and over 100 illustrations of the time (performers, costumes, models of set, posters, …), a biography which, even if it doesn’t claim to be complete, as compared with the monumental work of Jean-Claude Yon (Jacques Offenbach, Gallimard, 2000), is still fascinating !