The children’s choir of the Jewish community of Turkey, Estreyikas d’Estambol (Istanbul stars), recently celebrated its 15 years of existence with the release of a new CD Kantikas i Dichas Infantiles Sefaradis. This remarkable boxset, comprising a CD with 12 songs, a booklet and a DVD, results from the collaboration between the musicologist Susana Weich-Shahak and Izzet Bana, director of the children’s choir of Istanbul’s community.

Created by Izzet Bana in September 2004, the children’s choir Estreyikas d’Estambol numbers today 35 girls and boys aged from 8 to 14 years old. This vocal ensemble, which is today the only children’s choir in the world which sings in Judeo-Spanish, aims to help the new generation of Sefardi children to know, appreciate and re-appropriate the Judeo-Spanish culture that slowly vanishes. A particular attention is made on the fact that the children’s songs and lullabies, which occupy an important place in the Sefardi culture, are performed here in their most traditional form. The vocal ensemble Estreyikas d’Estambol already performed in many cultural events and festivals.

The children’s songs and lullabies of this album come from field recordings done by the musicologist Susana Weich-Shahak, which gave birth to the publication of a book entitled “Repertorio Traditional Infantil Sefardi; Retahilas, juegos, canciones y romances de tradicion oral”, from which Izzet Bana got inspiration to make relive this repertoire among the new generations. Judeo-Spanish language, called “Espanyol” in the Ottoman countries, is a mix of Spanish with words of Turkish and Greek origin, but also French origin, because of the influence of the Alliance Israélite Universelle’s schools in the former Ottoman Empire.

Often sang in the cradle (Durme durme chikitiko), we find in this CD songs to remember the names of each finger, to learn how to count, to learn the letters of the hebrew alphabet (Alef Avyana) or to underline the importance of the Jewish tradition (La Tora la Tora). The DVD shows live performances of these songs. 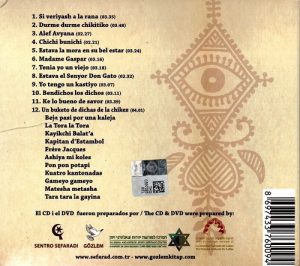