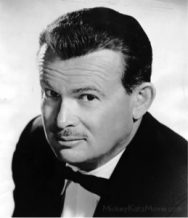 Mickey Katz, whose real name was Meyer Myron Katz, was born on June 15, 1909 in Cleveland, USA, into a Jewish family. His father, Menachem supported the family as a tailor, but money was always tight in the Katz family.

One evening when Katz was eleven, his father took him to a concert. A clarinet solo was on the program. On the way home, Katz told him he wants to play the clarinet. But for his father to pay for an instrument and lessons was out of the question. The next day Katz asked the bandmaster of the local high school for a school clarinet, and within a few days he received an old and dusty clarinet. The next step was to find a way to pay for clarinet lessons. Katz went to his Uncle Sam and offered to clean his tailor shop if he would pay for the lessons. His uncle agreed, and soon Katz was studying under Joseph Narovec. He made excellent progress on the instrument, and quickly learned saxophone as well. 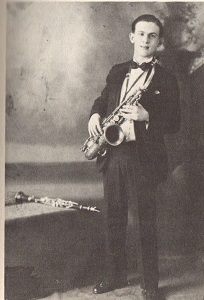 As children, Mickey and his siblings contributed to the family finances by entering amateur musical contests in the neighborhood theaters and bringing the prize money home to their parents. Even after graduating from high school, Mickey continued to support his family with the money he earned from his music.

Fresh out of high school, Mickey Katz joined the music band led by Phil Spitalny and went on a road tour. While waiting at the train station to leave, Katz met Grace Epstein (1912-2004), who became his wife three years later in 1930. He was then 20 years old, and her, 17.
After the tour, back in Cleveland, Mickey played in several bands, but without real success. Deciding to try his luck in New York City, Katz left Cleveland in 1929. After a hard time at first, and with the help of his friend Ed Fishman whom he ran into by chance, he got hired to play in Howard Phillips’ orchestra at the Manger Hotel. But the job ended in 1930 after his marriage, and the couple had no choice but to go to live in Grace’s uncle’s home.
Katz was soon saved from this situation when he received a phone call from Jack Spector, a friend back in Cleveland. A spot for a clarinet and sax player had recently opened up in Maurice Spitalny’s band at the Loew’s State Theater, and Spector had recommended Katz. Katz moved back to Cleveland with Grace and played in the orchestra. In 1933 he left the orchestra and joined the RKO Palace Theater, where he played until 1935, when the Cleveland musicians went on strike. Unfortunately for Katz, the union lost the strike, and Katz was jobless once again. 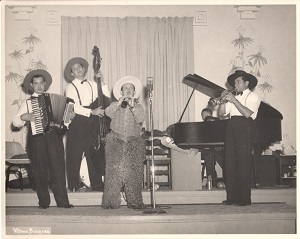 He soon found work playing for vacationers as they sailed around Lake Erie, every summer from 1935 to 1939. During the off-season, Katz found what work he could playing various one-night gigs. When the boat he played in went out of business in 1939, he moved on to a position as bandleader and MC at the Ohio Villa gambling palace.

In 1942, in the middle of the war, Mickey got hired as bandleader in a theater-restaurant in Cleveland. He then was called to join the army, but quickly classified 4-F and released from his military obligation after failing his physical examination. He found other ways to help the U.S. army, though. For example, he began to sell war bonds after his shows, bringing $25,000 to $30,000 a week for the U.S. government. He also played for servicemen at the USO canteen at Cleveland’s St. John’s Cathedral. Then in 1945, he took his six-man comedy and band group Mickey Katz and His Krazy Kittens on a USO tour of Europe.
After the war, Mickey Katz met the musician Spike Jones. Katz played with Jones for more than a year, but never felt he was paid enough so he left Jones in 1947.
Between 1948 and the mid 1950’s, he performed in a music revue in English and Yiddish, called Borscht Capades. Featuring comedy acts, acrobats and singers, this American Yiddish show toured all over USA. Mickey Katz could thus show his comedic skills. Dressed up in cowboy duds at the Bar Mitzvah Ranch he led many of his Western themed parodies making fun of Jewish life and its discomfort with the West and cowboy life. 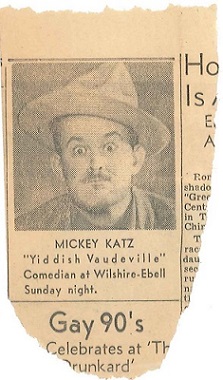 Katz soon decided to make an English-Yiddish comedy record, featuring his two songs, Haim afen Range and Yiddish Square Dance. The original run of 10,000 copies released in New York City sold in three days, and RCA received orders for 25,000 more. Katz then went on to parodize Tico, Tico with Tickle, Tickle. In the beginning of the 1950’s, his parody of Davy Crockett, which became Dovid Crockett, was a big hit.

Katz was largely a jazz musician, but his music is flavoured with klezmer music, and his songs often lampooned both Jewish and American culture.

Although Katz had his fans, not everybody loved him. Most of these people were affronted by the way he emphasized Jewish differences, convinced that his antics would help perpetuate Jewish stereotypes. There were many radio stations that refused to play his records, and several venues feared hiring him.
Nevertheless, Katz continued to create parodies until 1957 and continued to perform off and on until his death in 1985, aged then 75.