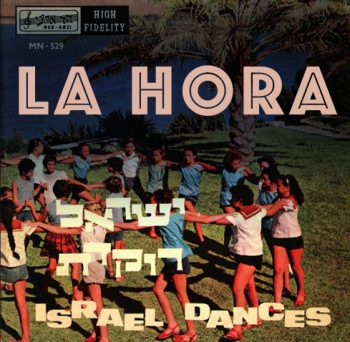 Originally, the hora (also known as “Romanian hora”, “zhok”, “londre”, “volakh” or “krimer”) is a slow dance often practiced in Romania (Moldova, Bessarabia, Bukovina) and in certain areas of Ukraine, by Jews and non-Jews.

It was danced in circle or in a line, on a triple-meter rhythm (3/8 or 3/4), with an accent on the 1st and 3rd steps. The first step was short and the third was stretched, giving the impression of an irregular and lame rhythm.

The horas were often used in parades and informal processions, like for example to mark the departure of guests or in-laws at the end of a wedding (like the tunes Firn di mekhutonim aheym, Gasn nigun)…

The Israeli hora has nothing to do with the Romanian hora. Built on a binary rhythm (2/4 ou 4/4) and syncopated, it resembles more to a bulgar, a lively dance in circle, in a line or in couples, on a rhythm close to the freylekh, which appeared by the Jews in Romania and south of Ukraine at the end of the 19th century and exported in the USA, where it became very popular in the 1920-1930’s. (Cf. the article written by Michel Borzykowski on klezmer dances).

According to Yohanan Boehm (Encyclopaedia Judaica 8, p. 971), the word « hora » would come from ancient Greek « choros » which means « dance ». The hora would have been brought to Palestine, by Jews from Romania during the second Alyah (1904-1914). It would have flourished during the third Alyah (1919-1923) to reach its peak during the fourth Alyah (1924-1931).
Quickly, this collective dance became popular in Kibbutzim and small communities, where it contributed to create the image of an aspiring nation, where each participant, holding arms, turns in a joyous and collective outburst. For this reason, the hora is a symbol of a national renewal and of a collective construction of an Israeli identity.

The Israeli pioneers (haloutzim) « danced the hora during the hardest moments, after the fights, after having suffered attacks, after having climbed high mountains », explains Dan Ronen, specialist of theatre.
One could come from any country in diaspora and join the spirit of the Israeli society by dancing the hora. It was recognized as the way to express the enthusiasm of building this country altogether. The hora was a way of celebrating this joy of dancing, united in our new homeland (R. Sturman, in Ingber, 1974 : 16).

Nowadays, the hora is still practiced in Israel, in particular during weddings and sometimes in TV shows. But paradoxically, it mainly kept its identity as a symbol for the Jews in diaspora, where it is regularly used during bar-mitzvas, weddings and other celebrations, rather than in Israel where it became a folk dance among others.

Principle of the hora :

The hora can be danced to many traditional songs of klezmer and Israeli folklore (like the famous song Hava Nagila). It consists of a circle, which can sometimes open up and go forward in a line. The dancers hold hands, do diagonal steps, forward or backwards, and make the circle turn, normally clockwise. The participants sing all the lyrics of the song, accompanied by musicians. The cymbalum, the accordion, the violon, the viola, the double bass, the saxophone, the trumpet and the panpipes are instruments that are traditionally used for a hora…

Listen to the playlist : hora in music
Take a look at the boxset: “So We Dance, Israeli Folk Dance”