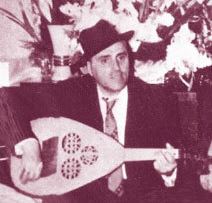 Son of a Christian mother and Jewish father, Cheikh Raymond was the undisputed master of Arab-Andalusian music, called “Malouf” in Constantine

Master of Arab-Andalusian music, Cheikh Raymond is a symbol of the Jewish-Arab brotherhood that voiced itself through music between the 1930’s and the 1950’s.

He was trained to malouf music with Cheikh Omar Chaklab and Cheikh Abdelkrim Bestandji. Malouf is the Constantine form of Art Music derived from the Arab-Andalusian musical tradition. Its instruments are the lute, the cithara and the oud, the tambourine, the viola and the Bedouin flute, specific of Constantine.

Virtuoso player of the oud (an arab lute), he performed during Jewish or Muslim family gatherings, and in concerts; he hosted a weekly program on the radio and a regular show on television, and recorded around 30 discs 33 RPM between 1956 and 1961, in addition to many 78 RPM discs.

His assassination by the National Liberation Front in 1961 marked the massive departure of the Jewish community of Constantine, and more generally from Algeria.

Look at other documents dedicated to Cheikh Raymond.

Discover the anthology in 3 CD’s, made from original audio recordings between 1937 and 1961 of de Cheikh Raymond

Listen to the radio show : Cheikh Raymond – The art of Constantine Malouf, hosted by Hervé Roten.