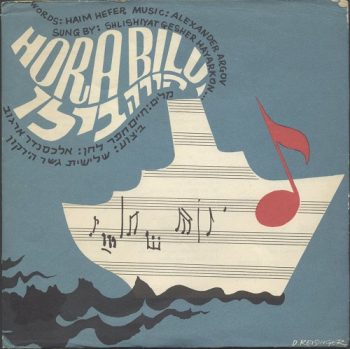 At first glance one thinks of a postcard but by looking closer, we observe around a central hole, microgrooves!
It is, in fact, a microgroove disc on a cardboard support which is called a phonocard.
The phonocard or sonorine is no other than a postcard invented apparently in England, at the beginning of the 20th century, on which the sender of the card could engrave a short voice message on the microgroove embedded in the card, readable using a special device called Phonopostal.
It is in the 60s that these sound cards, mainly published by the labels Phonoscope and Editions du Belvédère, will appear in France. Used quite marginally, they will unfortunately fall into oblivion 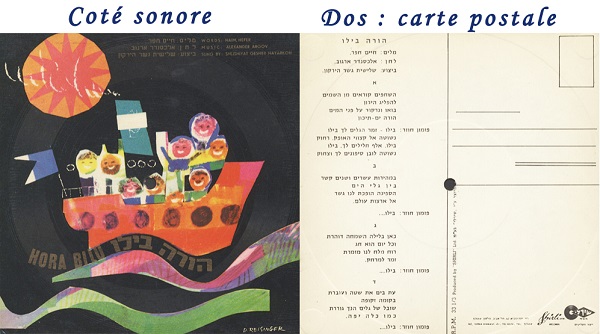 On this medium, some great hits have been published such as: Francis Lemarque’s A Paris, Buck Ram’s Only You and many children’s songs from Walt Disney films or classics (Au clair de la lune…).

Here is, from the archives of the EIMJ, a rare phonocard, 17cm, edited by Shirli Ldt.records containing the song Hora Bilu performed by Shlishiyat Gesher Hayarkon and composed by Alexander Argov.

Get ready to sail – get ready.

Let’s dance with the waves – the hora

the hora of the Bilu at the sea

to the sweet song of waves

With a thousand flutes playing – Bilu

Under the blue blue skies

On your white white decks

Listen to the phonocard Hora Bilu