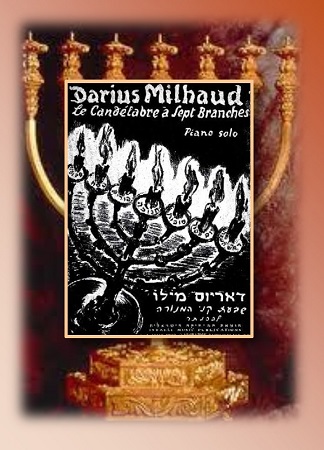 Composed in Paris between December 20 and 28, 1951, Le Candélabre à Sept Branches (opus 315) is a cycle of seven short works for piano by Darius Milhaud (1892-1974), evoking the main celebrations of the Jewish calendar (First day of the year, Day of penance, Feast of Tabernacles, The resistence of Maccabees, Queen Esther’s feast, Passover, Festival of Weeks). This 10 minute long piece of music was performed for the first time on April 10, 1952 by the pianist Frank Pelleg (1910-1968) during Ein Gev festival (Israel). This work, dedicated to Madeleine Milhaud, was published in 1952 by Israeli Music Publisher (Tel-Aviv). 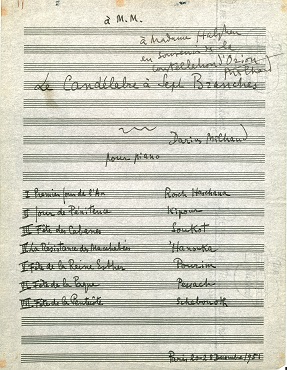 The title of this muscial score is a reference to the seven-branch menorah (candelabra) from Salomon’s Temple. Darius Milhaud belonged to an old Jewish family from the Comtat Venaissin. He never denied his roots. And some parts of his work reveals his attachment to Judaism[1]See Gil Pressnitzer’s article in Esprits Nomades.

The manuscript on printed tracing paper present at the European Institute of Jewish Music comes from the Halphen collection. This unique piece of work features a mysterious inscription by Darius Milhaud « to Madame Halphen in memory of Orion constellation ».

The EIJM possesses other musical scores by Darius Milhaud with Jewish inspiration, such as the 6 Hebraic Popular Songs published by Hegel in 1925, or the operas Esther de Carpentras (1938) and David (1954).