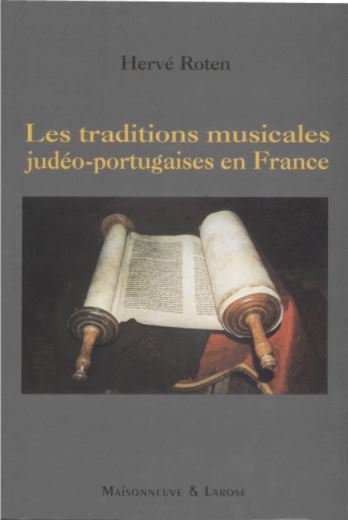 During the first half of the XVIth century, several families of Portuguese Maranos, who fled the persecutions of the Inquisition, settled in the Bayonne region. Considered “new Christians”, they secretly practiced Judaism until its official recognition in 1790.

These ancient Portuguese nations from South West of France have already been the subject of much research. But their musical traditions have never been studied completely. This book aims to accomplish this.

For nearly 200 years, the Jewish communities of Bordeaux and Bayonne developed an intense musical activity, as witnessed by the ten compilations of sheet music and many recordings that exist today. These sources offer a diachronic and synchronic view on the Judeo-Portuguese musical traditions in France.

In the context of his doctoral research, Hervé Roten studied the music of the Judeo-Portuguese communities from all angles for seven years. He has drawn many lessons from it, which are reflected in this book.

Hervé ROTEN is an ethnomusicologist, doctor of musicology, Paris IV Sorbonne University. He is the director of the European Institute of Jewish Music and author of numerous articles, books and records on the various aspects of Jewish musical traditions in France and in the world.

Purchase the book on the EIJM’s Online Shop