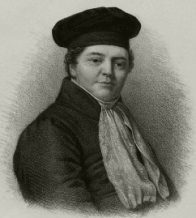 Born into a lineage of cantors from Poland and Pomerania, Israël Lovy was born August 31, 1773 in Schottland, near Dantzig. Eldest of a brotherhood of six children, he received a religious and musical education. Besides the singing that he did in Głogów’s yeshiva in which his father was a cantor, the young boy learned violin without telling his father.

With his quite remarkable bass voice and great musical intelligence, the young man travelled through Europe with two singing helpers. The experience of hearing Haydn’s Creation in Vienna encouraged him to study the music of Haydn and Mozart and to start learning musical composition.

From 1799 to 1806, he was hired as cantor in the rich community of Fürth (Bavaria). He studied piano, cello, Italian and French, and started to sing concert works of art music (Haydn, Mozart…).

Between 1806 and 1817, Lovy sang in the synagogues of Mainz, Strasbourg and London. In 1818 he was appointed cantor in London, and made a stop in Paris where he performed in synagogues as well as in private or public concerts. He achieved such a big success that he was hired by the Paris Consistoire, and became chief cantor of the new temple on rue Notre Dame de Nazareth in 1822. For ten years he organized the musical cult of this first consistorial temple by introducing many musical items from classical music (choral singing accompanied by the organ, composition of new songs in major or minor mode, etc.).

Attacked by breast disease, he died on January 7 1832, at the age of 59, and was buried in the North-Montmartre cemetary of Paris.

Listen to the playlist dedicated to Israël Lovy

Look at our archives about Israël Lovy