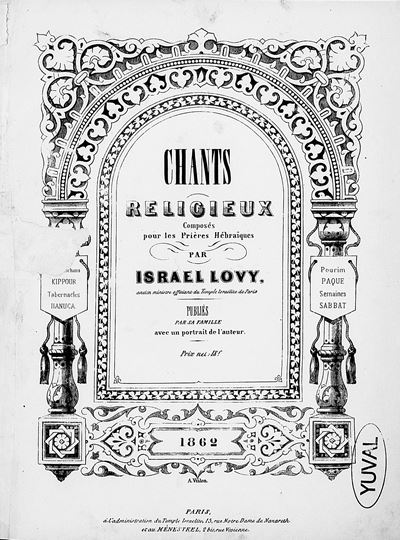 Listen to the works of Israël Lovy, initiator of the reforming of the French Jewish cult in the beginning of the 19th century

Coming from a lineage of cantors from Poland and Pomerania, Israël Lovy, born on August 31, 1773, near Dantzig (Germany), was one of the forerunners of the reforming of the French Jewish cult.

Hired in 1818 by the Consistoire of Paris, he became chief cantor of the new temple on rue Notre Dame de Nazareth in 1822. During ten years he organized the musical cult of this first consistorial temple by introducing many musical items from classical music (choral singing accompanied by the organ, composition of new songs in major or minor mode, etc.).

According to his grand-son Eugène Emmanuel, Israël Lovy created for the new consistorial cult « a choral composed of fifteen to twenty young children, completed with his singing helpers. In addition to the melodies that he brought from Germany, he composed new songs for all the different ceremonies. At the same time, he collaborated with the notables of the Consistoire, to settle the ceremonial aspects of the reading of the holy books, of the Torah and of the major holidays of the year. » *