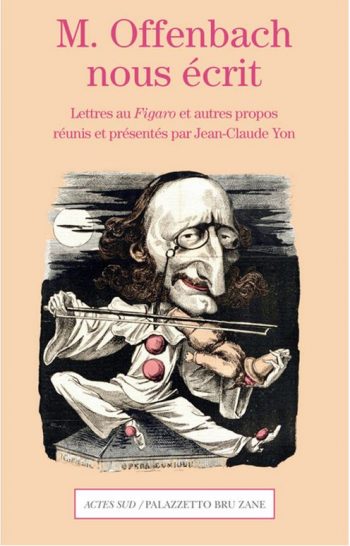 Published in January 2019 by the Editions Actes Sud Beaux-Arts / Palazzetto Bru Zane, this book by Jean-Claude Yon based on Offenbach’s mail with the founder of the newspaper Figaro, gives us a privileged access to the personality and thoughts of a musician at ease with words and musical notes.

During the bicentenary of Offenbach’s birth (1819), celebrated in 2019, he appears as always : obviously entertaining on the lyric stage, but booed, denatured, made fun of… The letters gathered here, annotated, commented, and analyzed show the intelligence of an author who had already understood everything about our media-centric society of the 21st century, with the precision and foresight of a wise communicator.

From 1854 until his death, Jacques Offenbach published about ten letters in Le Figaro : on matters of publicity claims, defending himself from attacks against him, funny information linked to an impertinent and playful mind : a crazy artist who plays with words as a mischievous critic of all forms of power. Reader and inspired commentator, Jean-Claude Yon*, historian of the theater in France in the XIXth century and author of a biography on Jacques Offenbach, is the initiator of this first class mail collection, which leads us to the heart of the thoughts about the media of the composer of La Belle Hélène, La Périchole, the Contes d’Hoffmann.

* Jean-Claude Yon teaches contemporary history at the university of Versailles Saint-Quentin-en-Yvelines. Specialist of history of entertainment in the XIXth century, he is the director of the Centre d’Histoire Culturelle des Sociétés Contemporaines (CHCSC). He is also director of study at the École Pratique des Hautes Études (EPHE).