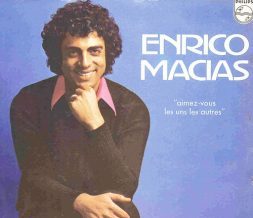 Enrico Macias is a French singer, musician and composer born in Constantine in Algeria, the 11th of December 1938. His real name is Gaston Ghrenassia, and he is the son of Sylvain and Suzanne Zaouch, a Jewish family of malouf musicians.

In parallel to a normal education, he also played a lot of music, and in particular guitar.
At first a teacher in 1956, he joined Cheikh Raymond Leyris’s orchestra, the great master of malouf music in which his father played the violin.
The death of Cheikh Raymond, killed in June 1961, led him to leave Algeria with his wife Suzy (Cheikh Raymond’s daughter). It’s on the “Ville d’Alger”’, name of the ship that brought them to France, that he wrote with his guitar the song «J’ai quitté mon pays, j’ai quitté ma maison » (I left my country, I left my home). He settled with his family in Argenteuil.

In Paris, Enrico worked irregularly, with small jobs and performed in cabarets, until he became noticed, and performed the first part of a concert of Gilbert Bécaud.

Among the several lyricists who wrote the songs of Macias’ repertoire, Jacques Demarny accompanied a great part of this performer’s career (from the 1960’s to the 1980’s) and was the main author of his repertoire (around 100 songs).
In 1962, he was seen on television in «Cinq colonnes à la une» that offered coverage on the repatriates from Algeria. His performance of the song «Adieu mon pays» (Farewell my country), became the symbol of the exile of the Pieds-Noirs. He then chose the nickname Enrico Macias. Pathé Marconi released his first album in 1963, with the hit song «Enfants de tous pays».

Aknowledged worldwide, he received the title of Singer for peace of Kurt Waldheim in 1980.
In 1985, he received the Légion d’honneur given by the Prime Minister Laurent Fabius. He became Officer in April 2007.

Look at his discography

Discover the discs and music sheets of Enrico Macias, from Maurice Arrouasse’s fonds
Listen to the playlist dedicated to Enrico Macias
Look at our archives about Enrico Macias