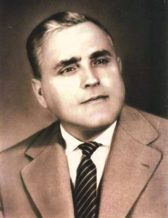 A master of Arab-Andalusian music, Cheikh Raymond is a symbol of Judeo-Arab brotherhood which expressed itself through music between the years 1930 and 1950. His assassination by the National Liberation Front in 1961 caused the massive departure of the Jewish community of Constantine, and more generally from Algeria.

Raymond Leris was born in 1912. His father was a Jew who came from Batna, capital city of the region of Aurès, and his mother was French. Abandoned by his mother when his father died fighting in World War I, he was adopted by a religious and very poor Jewish family.
Attracted by music, he learned Malouf with Cheikhs Omar Chaklab and Abdelkrim Bestandji. Malouf is the Constantine form of art music from Arab-Andalusian tradition. A mutual repertoire for Jews and Muslims, Malouf celebrates courtly love and impetus towards God. In North Africa as well as in the entire Arab-Muslim region, this music was kept alive, but many of its learned modes were forgotten due to its oral transmission. The instruments used are the lute, cithara and oud, tambourine, alto and Bedouin flute, specific of Constantine.
Becoming soon as good as his masters, Cheikh Raymond was respected equally by Jews and Muslims from Algeria, who call him since the 1930’s “Cheikh Raymond” in sign of respect.
Virtuoso oud player (an Arab lute), he performed during family occasions, Jewish or Muslim, and in concerts; he hosted regular programs on the radio and television and recorded around 30 discs between 1956 and 1961, as well as 78RPM discs. The members of his orchestra were called Nathan Bentari, Haïm Benbala, Larbi Belamri, Abdelhak, but also the fiddler Sylvain Ghrenassia and his son, Gaston, guitar player, who will later become famous under the name Enrico Macias.

Cheikh Raymond was assassinated by gunshot by the National Liberation Front on June 22, 1961, when he was food shopping in Constantine’s souk. His death was perceived by the 40.000 Jews from Constantine (nearly half the population of the city) as a final rupture, showing the impossibility to stay in Algeria.
Cheikh Raymond’s music is preserved because of his son Jacques Leyris, Enrico Macias and Professor Raphaël Draï (zal) who, in the 1970’s, was the first to resurrect his memory. the musician and musicologist Taoufik Bestandji, grand-son of Cheikh Abdelkrim Bestandji, also studied the recordings kept by his father.
In 1999, Enrico Macias gave him a tribute on stage, in the Algerian Cultural Center of Paris, with an orchestra led by Bestandji.
In 2011, Bertrand Dicale published a biography de Cheikh Raymond, completed with an anthology of his songs released by Universal. The main record available until then was a concert given in 1954 in the Popular University of Constantine, and released in 1994 on the Al Sur record label.

Listen to the radio program : Cheikh Raymond – the art of the Constantine malouf

Listen to the playlist : the music of Cheikh Raymond

Browse our archives on Cheikh Raymond