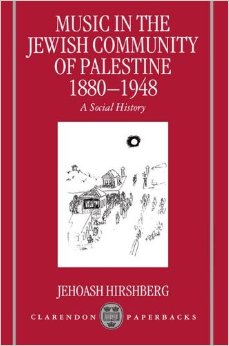 This book by Jehoash Hirshberg presente a social history of music of a Jewish community in Palestine since the beginning of the Jewish immigration in Palestine in 1880 until the Declaration of the State of Israel in 1948. This is the fascinating story of a small society of immigrants and refugees who established a professional musical institution internationally renowned, facing two world wars, local fights and national war at a large scale. Although it was under Ottomane domination, followed by British domination, the Jewish society of Palestine was almost autonomous about culture, its musical culture fought to find a balance between a transplanted European heritage and strong ideologic desire to get inspiration from the East.

The professor Hirschberg starts by describing the music in Palestine under the Ottomane domination, then retraces the turbulent history of the 70 following years in a chronologic way. The last chapters are dedicated to the wide spectrum of ideologic and social polemics that rule the musical scene during all that period.

As such, his book will interest not only the historians of music, but also the social historians and cultural anthropologists and historians of contemporary Judaismn.