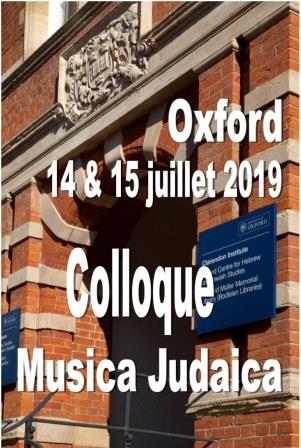 Musica Judaica brings together scholars, performers and cantors for a two-day invitational conference to investigate the interdependence, interference and interconnectivity of oral and written traditions within Jewish Music in European Ashkenazic cultures from the early 19th century until the Shoah. The conference takes into account the late medieval and early modern pre-history of the period as well as its contemporary non-Jewish cultural contexts. Presentations explore wider theoretical questions reflecting on problematic terms such as “classical”, the artificial division between sacred and secular, and the use of music as source for writing Jewish history.

The symposium is organized by Marton Ribary (University of Manchester) and Diana Matut (Halle-Wittenberg / Heidelberg).
There will be two round tables and four conferences, the main one led by Mark Kligman (UCLA) will be illustrated with a concert performed by Alexander Knapp (SOAS) on the piano, the Rabbi and Cantor Gershon Silins and the choir The Joyful Company of Singers led by Peter Broadbent.

Hervé Roten, Director of the European Institute for Jewish Music, will speak on two occasions :