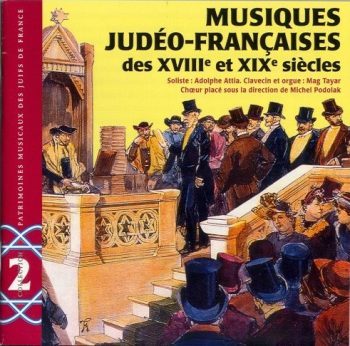 MUSICAL HERITAGE OF THE JEWS FROM FRANCE COLLECTION, vol 2

In the 18th century, the Jewish people are concentrated in three major locations : the Comtat Venaissin, the South West of France and Alsace-Lorraine region. Their musical practices come primarily from oral tradition.

The reform of the Consistory at the beginning of the 19th century will bring great changes to musical practices in the synagogues: music will be written, chorus created, and instrumental accompaniment become widespread. But the 2nd World War and the demographic upheavals of the 20th century will cause the decline of these three traditions. They are, however, original musical traditions. The Comtadin music, which has been forgotten today, reveals the old-fashioned charm of Provençal music from the 18th century. Religious poems are in the Provençal language, sometimes mixed with Hebrew or Aramaic.

The traditions from Bordeaux and Bayonne resembles those of the ancient Portuguese nationality from South West of France that had a complicated fate. Music from various origins are mixed in, from antique biblical cantillations to harmonized arrangements of the 19th century, touching on the soft Andalusian melodies of Medieval Spain.

Finally, in the music from the Consistory, the use of the organ, the beauty of the mixed chorus and the care brought to the arrangements reveal a cult that wishes to integrate the aesthetic styles of its era while at the same time, be open to modernity.

Featuring many previously unreleased pieces of music recorded by Adolphe Attia, Mag Tayar and Michel Podolak’s choir, this CD offers a glimpse into the liturgical traditions of the Comtadins, Portuguese and Ashkenazim in France in the 18th and 19th centuries. 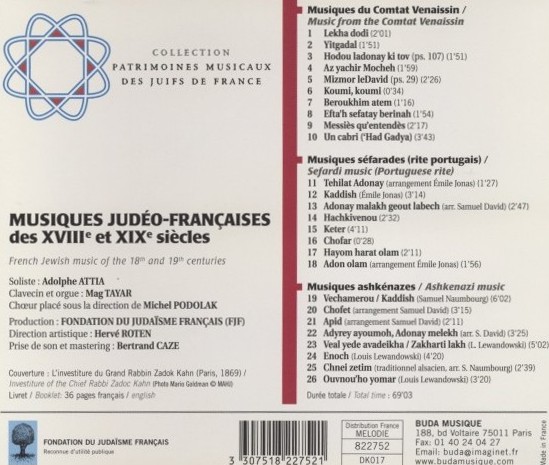