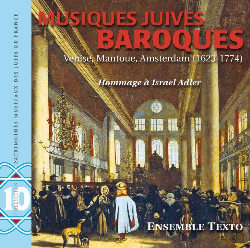 MUSICAL HERITAGE OF THE JEWS FROM FRANCE COLLECTION, VOL. 10

Published by the Foundation of French Judaism, this CD was recorded during a concert of baroque Jewish music in Paris and organized by YUVAL organization in tribute to its founder, Israel Adler.

In the beginning of the 17th century, many Jewish musicians were welcomed by the Dukes of Mantua. Among these was Salamone Rossi (near 1570 – near 1630) who published in Venice in 1622-1623 an important collection of music from the synagogue containing 33 psalms written for 3 to 8 voices. A few years later, this attraction for polyphonic art music reached the communities of the Comtat Venaissin and Amsterdam, where weddings, circumcisions and different important occasions were celebrated with hymns and small dramatic musical works written for the particular moment. Some of these new melodies were so appreciated that they became integrated into the traditional song repertoire where they have been preserved to this day.

In this CD, the 10th volume from the collection Patrimoines musicaux des Juifs de France, the Texto Ensemble – a professional choir of 8 singers, accompanied by an orchestra of 10 musicians plays 13 compositions by Salamone Rossi, Abraham Caceres and Cristiano Guiseppe Lidarti, that witness the beauty of the Jewish musical practice in Italy and Amsterdam,during the at the baroque era, and which extended to the beginnings of the galant style. 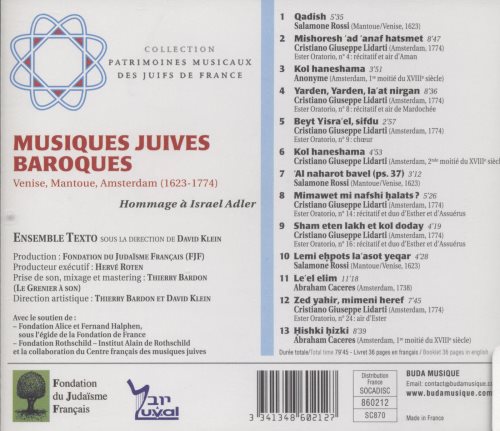