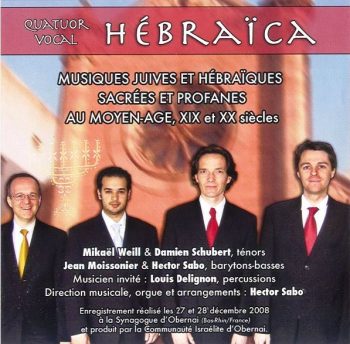 In the Sefardi tradition, we find at the same time secular Jewish music, represented by the popular genre « ladino », name of the Judeo-Spanish language, and sacred music, based on Hebrew texts and used during religious services. In the Ashkenazi tradition, though the examples of ancient music are fewer, through the Rhine region repertoire, one can find several interesting examples of musical expression integrated in the surrounding culture. This tradition from Eastern Europe has known a development since the 19th century. At that time, hundreds of old melodies from European Jewish music tradition have been written, transcribed and harmonized, in order to assure their continuity and definitive setting. Indeed, the oral tradition led systematically to stylistic evolutions.

The quatuor Hébraïca created a bridge between ancient musical tradition, medieval tradition and the music from the 19th and 20th centuries, with composers who restituted the soul of this music, among the oldest traditions still living.

The CD can be purchased at the Communauté Israélite d’Obernai, from Denis Geissmann (degetrad@wanadoo.fr).
Fee of the CD : 15 € + 3€ of shipping. 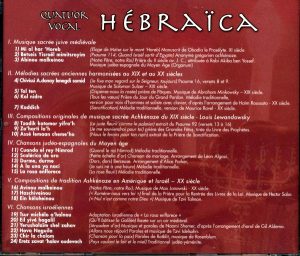