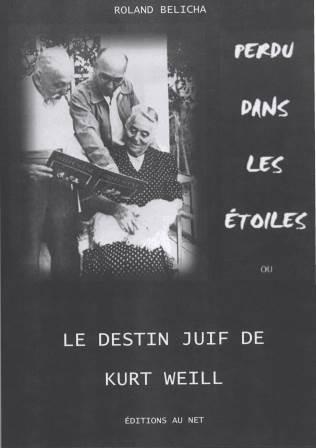 Born in Dessau (Germany) on March 2nd 1900, Kurt Weill was the third of four children of Emma Ackermann and Albert Weill, cantor in the synagogue of Dessau (from 1899 to 1919) and composer, mainly of liturgical music. The composer grew up hearing synagoge music. Among his ancestors, we find several rabbis (among them Jakob Weil born around 1390 in Weill der Stadt, not far from Stuttgart). In 1955, five years after the death of his son, Emma Weill, mother of the composer, declared, a little ironically « For our greatest delight, Kurt Weill was a composer. We could have had one more rabbi, or a doctor. »

Among the youth compositions of Kurt Weill, we can find five works of Jewish inspiration :
Mi Addir (1913) (sang prayer for Ashkenazi weddings)
Gebet (1915) (written for his sister’s religious majority)
Ofrah’s Lieder (1916) (cycle for vocal and piano on poems by Juda Halevi)
Sulamith (1920) (choral fantasia for soprano, women’s choir and orchestra, on a theme coming from the Song of Songs)
Recordare (1923) (Motet a cappella for 4 voice choir and children’s choir, based on the fifth chapter of Jeremiah’s Lamentations)

Between 1923 and 1937, Kurt Weill’s works don’t have any links to Judaism. But the rise of Nazism and antisemitism force the composer into exile, first in France in 1933, then to USA in 1935, and push him to renew his ties with his Jewish roots.
In November 1933, Meyer Weisgal comes to Paris to show Max Reinhardt a project of a big show on the history of the Jewish people, in order to make the world know the threats against him. A similar project was already conceived by Arnold Schönberg in 1927 with Der biblische Weg (The biblical way). Reinhard calls Franz Werfel to write the libretto and Kurt Weill for the music. The project experiences delays and will be finally finished in the USA in 1937 with the creation of the oratorio The Eternal Road in New York. According to Roland Bélicha, « For this work, Weill studied Hebrew music scores that his father, composer of liturgical music, sent him. » The Eternal Road comprises four parts : 1. The Patriarchs, 2. Moses, 3. The Kings and 4. The Prophets.

As underlines Pascal Huyne, musicologist and author of several books about Kurt Weill, The Eternal Road is an important step in Weill’s acknowledgement to his belonging to Jewish culture.

In 1938, Kurt Weill writes Two Folk Songs of the New Palestin. It is two arrangements of songs written for Jewish pioneers of Palestine : Havu l’venim (composed by Mordekhaï Zeïra on a text by Alexander Penn) and Baa m’nucha (composed by Daniel Samburski on a text by Natan Alterman). These two melodies for vocal and piano were published in two series of Folk Songs, which count also arrangements by other composers, such as Darius Milhaud and Aaron Copland.

In 1943, Weill writes We Will Never Die – A Memorial for solo tenor, narrator and orchestra, dedicated to the two million Jews who died in Europe. That same year, Kurt Weill becomes American citizen.

In March 1946, at the request of Cantor David Putterman, Weill writes a Kiddush for the 75th anniversary of the Park Avenue synagogue in New-York. That work is dedicated to his father.

Finally in 1947, on the occasion of a trip to Palestine to see his parents who had settled in Nahariya in 1935, Kurt Weill meets Chaim Weizmann, future president of the State of Israel, who asks him to make an orchestration of Hatikvah, the Zionist anthem which will become years later the anthem of the State of Israel. This orchestral musical arrangement was given for the first time in New-York on November 25th 1947.

Two years and a half later, on April 3rd 1950, Kurt Weill dies, struck by a heart attack in New-York.