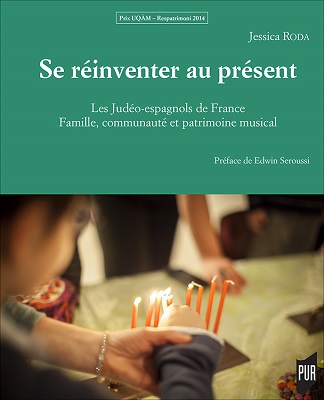 The Judeo-Spanish people of France. Family, community and musical heritage.

Searcher invited at Columbia University (USA) and post-PhD searcher at Concordia Univeristy (Canada), Jessica Roda is an anthropologist and ethnomusicologist. In December 2012, under the supervision of the Paris Sorbonne University and the University of Montreal, she validates her PhD on the following subject « Live the Judeo-Spanish music in France. From collecting to patrimonialization, the artist and the community ».
The book she publishes in 2018 at the Presses Universitaires de Rennes Editions Se réinventer au présent – Les Judéo-espagnols de France – Famille, communauté et patrimoine musical comes directly from her PhD work.

In the first part of the book, Jessica Roda questions the process of building the Judeo-Spanish identity, first in Spain, then in the Ottoman empire, and finally in France. In the latter, several associations will favor, as soon as 1980, the rebirth of a Judeo-Spanish cultural life, which expresses itself in particular with concerts where the music linked to the language will allow to make live again a lost heritage. These concerts favor the emergence of artists specialized in Judeo-Spanish singing, such as Sandra Bessis, Stella Gutman, Hélène Obadia, Marlène Samoun…
The repertoire of these artists was built from musical annotations (due in particular to the ethnographic collections of Alberto Hemsi (1898-1975), Léon Algazi (1890-1971) and Isaac Lévy (1919-1977)) as well as from the first recordings of Judeo-Spanish music that started in the Ottoman empire in 1906-1907 (Salomon Effendi, Haim Effendi, Isaac Algazi, Jacob Algava, Albert Beressi…).
In the years 1950-1960, era characterized by the cutural revival, the Judeo-Spanish people, mainly settled in the USA, in Israel, in France and in Belgium, form a transnational community in search of identity markers. In France, the Judeo-Spanish revival starts in 1982 with the release of a record by Esther Lamandier, Romances, followed by recordings by Hélène Engel (La Serena, 1988) and Françoise Atlan (Romances sefardies, 1992). In the years 2000, the Israeli singer Yasmin Lévy acquires a strong notoriety thanks to her interpretation of the Judeo-Spanish repertoire that she blends with flamenco.

In the second part of the book, Jessica Roda tries to analyse the French Judeo-Spanish musical practices of today. She shows in particular the existence of interactions between the Judeo-Spanish stage – represented sometimes by artists who don’t belong to this tradition –, the public institutions or Judeo-Spanish communities who call upon these artists, and the families inwhich this heritage perpetuate, but still adapting itself to the new usage (the stage) and its new function (identity assertion).
This study highlights the phenomena of patrimonialization of todays’s Judeo-Spanish repertoire. This patrimonialization of musical practices, aiming to establish a direct filiation between Medieval Spain of before the expulsion of Sefardi Jews and the Sefardi Jews of today, allows the Judeo-Spanish people to single out in front of other components of the French Jewish community, in particular Ashkenazi and North African, but also in front of non-Jews. Through a boomerang effect, this recomposed heritage in reinjected in Judeo-Spanish families who, even if they are not fooled by the authencity of this music, re-appropriate it until considering them as an element of important cultural reference. Music becomes thus the mirror of a reconstituted identity and a regained pride.