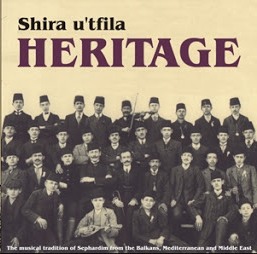 Shira u’tfila was created in 2000 by the singer and ud player Stefan Sablic (Asher Alkalay). This band of Sephardi music from the Balkans, settled in Belgrade, takes its inspiration from the diversity and richness of Judeo-Spanish music traditions, but also Turkish and Ottoman, Arabic and Balkani traditions.

Shira u’tfila released nine CD’s, toured in many countries and participated to several projects related to Sephardi music from the Balkans, the Mediterranean and the Middle-East.

Heritage, released in 2007, is their fifth album. It was recorded on June 25, 2006, for the 80th anniversary of the Sukkat Shalom synagogue of Belgrade.