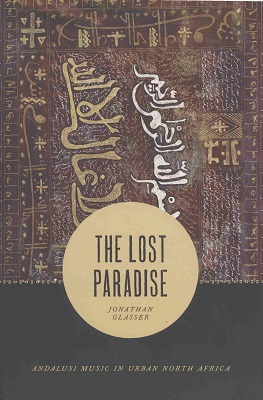 In February 2016 was published this book that draws ethnographic and archival work to consider the entanglement of materiality, personhood, and temporality in the urban, Arabic-language musical and poetic practice known as Andalusi music.

For more than a century, urban North Africans have sought to protect and revive Andalusi music, a prestigious Arabic-language performance tradition said to originate in the “lost paradise” of medieval Islamic Spain. Yet despite the Andalusi repertoire’s enshrinement as the national classical music of postcolonial North Africa, its devotees continue to describe it as being in danger of disappearance. In The Lost Paradise, Jonathan Glasser explores the close connection between the paradox of patrimony and the questions of embodiment, genealogy, secrecy, and social class that have long been central to Andalusi musical practice.

Through a historical and ethnographic account of the Andalusi music of Algiers, Tlemcen, and their Algerian and Moroccan borderlands since the end of the nineteenth century, Glasser shows how anxiety about Andalusi music’s disappearance has emerged from within the practice itself and come to be central to its ethos. The result is a sophisticated examination of musical survival and transformation that is also a meditation on temporality, labor, colonialism and nationalism, and the relationship of the living to the dead.

Learn more about the author
Order the book