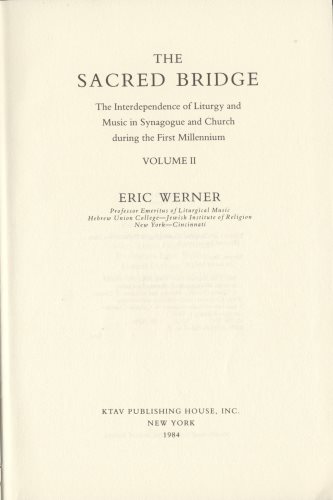 A reference study about the relations between music, and the liturgy of the synagogue and the church in the 1st millennium of the Christian era. Born in Ludenberg (near Vienna), Eric Werner (1901-1988) studied music and religion in Europe and received a PhD of musicology in the university of Strasbourg in 1928. He taught in Sarrebruck (1926-1933) and Breslau (1934-1938). When he immigrated to the USA in 1938, he started teaching music and Jewish liturgy at the Hebrew Union College in 1939, before becoming the president of his own sacred music school in New York in 1951.

Table of Contents :
1. Liturgical Music in Hellenistic Palestine
2. Away from the World_Towards the World
3. The Origin of Psalmody
4. The Connection of Psalmody with the Lesson and with the Ecclesiastical Year
5. The Genesis of the Sanctus in Jewish and Christian Liturgies
6. Two Hymns for passover and Good Friday
7. Art Music and Folklore in Ritual
8. Traditions, its Trustees and Transmitters between Synagogue and Church