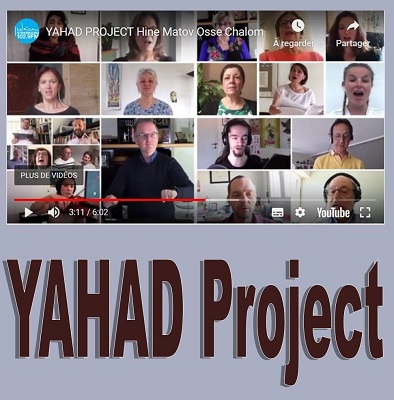 Under the direction of Hector Sabo, with the participation of La Truite Lyrique and the Polyphonies Hébraïques de Strasbourg

The Yahad project was created during the lockdown period (March 17 – May 10, 2020) enacted by the French government due to the COVID-19 facing the pandemic.

Inspired by the 1st verse of the Psalm 133 : Hine ma tov ouma nayim shevet ahim gam yahad (How good and pleasant it is when God’s people live together in unity!), this video published on the YouTube channel of Radio Judaïca Strasbourg is intended as a hymn to life and the joy of being together through music.

This project was initiated by Dan Leclaire, producer, and Hector Sabo, music director of the bands La Truite Lyrique and Les Polyphonies Hébraïques de Strasbourg. Hector Sabo arranged for a choir, a piano, a violin, an alto and a transverse flute the song Hine ma tov ouma nayim shevet ahim gam yahad, followed by two versions of Ose shalom (He who establishes peace), the first one on a tune of a famous Israeli song, the second on the melody of the Kaddish for 5 voices by Salomone Rossi (Mantua, 1570-1630).

The mixing was done by Studio Kawati and the video montage by Gabriel Goubet, with the help of Solène Picard.