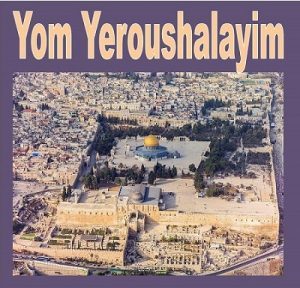 Jerusalem, city of David, inspired many songs to Israeli artists, from Naomi Shemer to Shoshana Damari, Yehoram Gaon or the Parvarim…

Yom Yerushalayim (in Hebrew : יום ירושלים « Day of Jerusalem ») celebrates the reunification of Jerusalem (in reference to the 3rd verse of the Psalm 122 יְרוּשָׁלִַם הַבְּנוּיָה כְּעִיר שֶׁחֻבְּרָה לָּהּ יַחְדָּו.) after the conquest of East Jerusalem by the Israeli army during the Six-Day War, wednesday June 7, 1967 (28th Iyar 5727)

On May 12, 1968, the Israeli government proclaimed the 28th Iyar to be a holiday, as the « Day of Jerusalem ». On March 23, 1998, the Knesset decided to make this day a national holiday, and the occasion to do commemorative and joyous ceremonies with many open air concerts.

The liberation of Jerusalem, and having access to the Western wall of the Temple, the Kotel, inspired many songs by Israeli artists, like the famous song Yerushalayim shel zahav (Jerusalem of gold), written by Naomi Shemer and performed by Shuli Natan on the eve of the Six-Day War.

Read the feature article about the song Yerushalayim shel zahav.