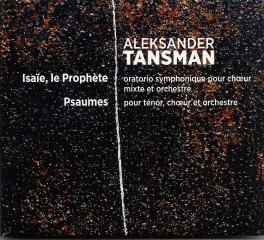 In 1950, Alexandre Tansman finished the composition of his oratorio Isaïe the Prophet. The composer chose several chapters from the Prophets, from Isaïe of the Old Testament. The choice and order of the various chapters are organized in the perspective of the general construction of the oratorio and its expressiveness. The composer wished to make feel the trail from anguish to joy, passing by a prayer and a song of hope. Tansman composed this piece as a headstone paying tribute to the six million Jews killed during the Second World War, and to salute the creation of the State of Israel. This composition features seven parts, among which one fuga for orchestra, and an intermezzo for wind instruments. It’s the first of the three music scores that Tansman liked the most among all his production, and of which he was proud. This oratorio was broadcasted in 1952 on the French Radiodiffusion by the Choral and National Orchestra under the direction of the composer and was performed for the first time in Los Angeles USA, under the direction of Franz Waxman, as well as  an audio recording under the direction of Paul van Kempen.

The present recording was made on November 9, 2012 in Lodz, Tansman’s native town, for an inauguration concert of the 9th Alexandre Tansman’s Contest and Festival.
It also features a recording of the Psalms 118, 119 and 120, put on music by Tansman in 1960-61.