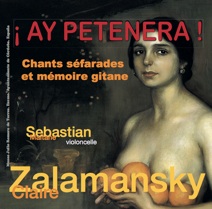 A gypsy with a deadly charm, La Petenera was a woman from Paterna de Rivera near Cadix in Andalusia, in the 18th century. Her name was given to a song and a dance of flamenco …

A women with a sulfurous reputation, men’s perdition, she appears in various letras (flamenca lyrics) as the wandering Jew, looking for a her synagogue.

Carmen before its time, la Petenera, who haunts sometimes the men’s hearts and the memory of Spain, is supposed to be at the origin of these Sefardi songs.