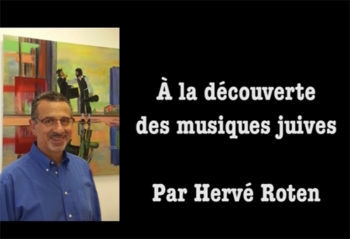 A filmed lecture, by Hervé Roten, in the Medem Center, on December 7, 2016

Mysterious and captivating, Jewish music expresses the soul of a people who spent the major part of its existence in exile. In the beginning, antique Hebrew music was rooted in Sumerian, Babylonian, Assyrian and Egyptian music. Between the 4th century before J.C. and the 1st century of the Christian era, Judea endured the cultural influence of Greek and Roman civilizations, reflected by the names of the Greek instruments in the book of Daniel.

After the destruction of the Temple (70 after J.C.) and the beginning of the diaspora (130 after J.C.), the synagogue became the center of Jewish life. The transition from the sacrificial ritual to the prayer took away the music instruments for the worship and established the singing as the main vehicle of faith. The second half of the first millennium saw the emergence of the religious poetry (piyyutim), the writing of the biblical cantillation (te’amim) and the confirmation of the cantor’s role (hazzan) as keeper of the local traditions (minhagim).

The second millennium strengthened the rise of a rich and plural musical practice. Music took then a certain distance from the text: it evolved and got a certain independence. During the Middle-Ages and the Renaissance, several writings mentioned the presence of Jewish artists or composers, from which the music is lost today, due to the absence of notation. It’s in the 16th century, and especially in the 18th and 19th centuries that the first musical notations appeared. In the beginning of the 20th century, various ethnographic expeditions in Europe and in North Africa allowed to note several traditional Jewish music pieces and to record fragments of musical traditions that would, for some of them, disappear during the Holocaust.

Nowadays, the Jewish musical panel is more than ever subject to an accelerating process of evolution and mutation.

This conference, illustrated with many audiovisual examples, makes us travel through 3.700 years of Jewish music…