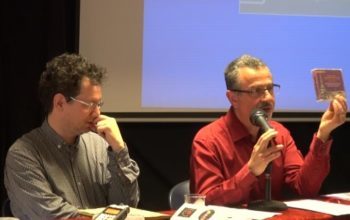 A filmed conference, as part of the first edition of “Campus en musique” organized by the Medem-Arbeter Ring about Jewish Music in Paris in the Aftermath of WWII, presented by Hervé Roten, director of the European Institute of Jewish Music, and David Winter, grand-nephew of the singer Dave Cash

In the immediate period after the war, the Jews tried to reconstruct, individually and collectively. Paris was then the center for hopes of revitalisation of Jewish life in Europe, and the place of passage or settlement for the survivors in search of a new home. Many organizations took part in the cultural life : Jewish societies, theatres, but also cafes and cabarets, such as La Riviera held by Bernard Potock and Dave Cash, le Habibi Club held by Sigmunt Berland (formerly known as the Petit Rancho) or the dancing-cabaret Le Zodiac. In the beginning of the 1960’s, Dave Cash opened the Cabaret Bagatelle, on 29 rue de Clichy. A few years later, he moved and opened in the Pigalle neighborhood Le Cabaret Yiddish, which would close down in the 1970’s, because of the lack of clients.

In 2015, the Music label of the European Institute of Jewish Music released a 6 CD boxset which gathered over 120 songs that witnessed the creative atmosphere of Jewish cabarets of after the war, where artists dared to mix folklore and samba, nostalgic tangos or satirical swings, in Yiddish, and also in Russian, Hebrew, Romanian…

Purchase the 6 CD boxset on the online EIJM’s shop